Toyota cuts production, to make 300,000 less cars this year due to chip shortage

Amid the global chip shortage crisis and Covid-19 pandemic affecting some of its facilities in Japan, Toyota now aims to build 9 million vehicles till March 31, next year.
By : HT Auto Desk
| Updated on: 10 Sep 2021, 12:44 PM 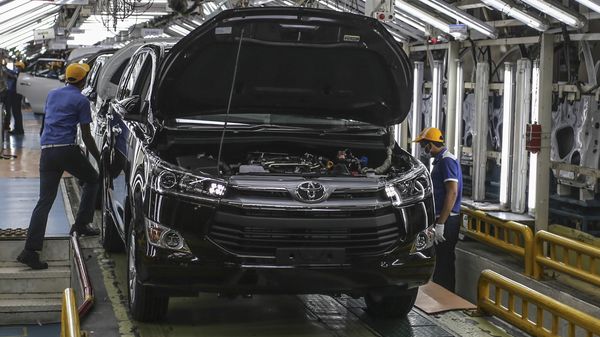 Japanese vehicle manufacturer Toyota Motor has announced that it has been forced to revise its production target for the ongoing financial year due to the global chip shortage crisis and suspension of work at several facilities due to Covid-19.

As of now, Toyota has not clarified if its production facility in India, located in Bidadi (Karnataka) will be affected due to this decision. Toyota sells Innova Crysta, Fortuner, Urban Cruiser, Glanza, Yaris, Camry and Vellfire - all of which are manufactured in the country.

Toyota attributed the decision to the ongoing shortage of auto parts caused by the spread of Covid-19 in Southeast Asia. With the production cut, Toyota now aims to produce 9 million vehicles by March 31, next year. The carmaker also said that despite an unclear outlook for November and beyond, it is likely to stick to the production plan for the rest of the financial year.

Toyota said that the one of the key reasons behind its decision to cut down production is a decline in operations at several local suppliers. As many as nine Toyota manufacturing plants situated in Japan are scheduled to suspend production in coming days due to the crisis. The carmaker also said that the spread of Covid-19 infections remains unpredictable, making it difficult to maintain operations due to lockdowns at various locations. Toyota also said that it is looking at options to transfer production to other regions as well.

Toyota has assured its customers that it will try to to do its best to deliver cars in time. It said that the ‘focus remains on doing everything we can’ to deliver as many cars as possible to customers as quickly as possible, such as shifting production plans to models with high demand.