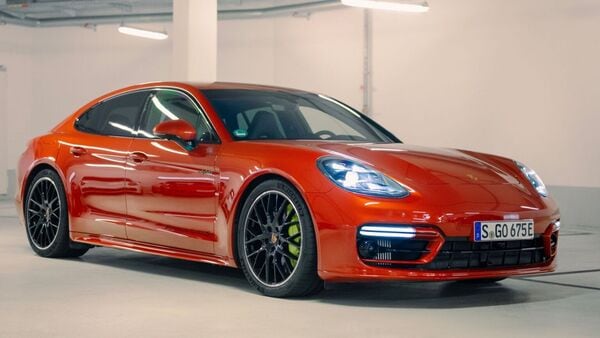 Porsche has unveiled three different hybrid variants of its Panamera range namely Panamera 4 E-Hybrid, the 4S E-Hybrid, and the Turbo S E-Hybrid. What more, these hybrid models will also offer three varied exteriors. Porsche has informed in addition to the standard Panamera, the electrified models will also be available as a Sport Turismo or as an Executive version with a longer wheelbase.

These redesigned Panamera models, under its hood, boast a 100-kilowatt electric motor accompanied by an eight-speed PDK dual-clutch transmission that can deliver a torque of 400 Nm directly to the wheels. The battery pack has also been upgraded to 17.9 kWh which the sports carmaker said is enough for up to 64 kilometres of purely electric driving.

Porsche shared the Hybrid Auto mode in these models will provide the highest efficiency to the drivers who drive long distances. The company added the most efficient use of both powertrains will always be calculated on the basis of a real-time route. Panamera E-Hybrid comes with a feature called the E-Hold function, which keeps the power supply at the current charge level and instead uses the car’s combustion engine. Hence, one can access the former again at a later time at the push of a button, for example when boosting or driving the final part of the route purely on electric power.

Coming to the charging, all the electrified Panamera models come with an E-charge function that shifts the load point of the engine. Therefore, the biturbo combustion engine will generate more energy for propulsion and the excess energy can be stored in the battery.