Tesla sells merchandise such as apparel, belt buckle, mini models of its vehicles including Cyberquad for kids as well as Cyberwhistle.Musk has been a cryptocurrency supporter, and had asked Twitter users in May this year if they wanted Tesla to accept Dogecoin as a currency for purchasing its EVs.
By : HT Auto Desk
| Updated on: 14 Dec 2021, 17:40 PM 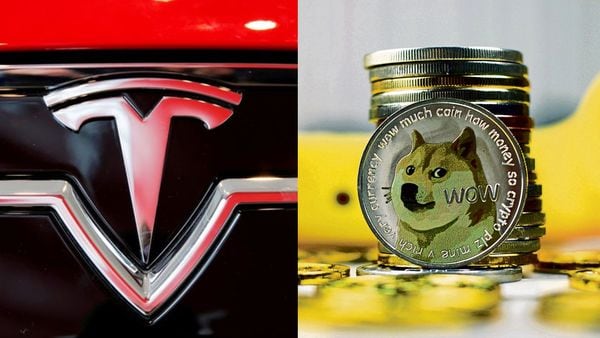 Tesla CEO Elon Musk on Tuesday said that the EV company will start accepting Dogecoin as currency for some merchandise on a test basis. Musk took to Twitter to make the announcement, saying, “Tesla will make some merch buyable with Doge & see how it goes." Post this announcement from Musk, Dogecoin jumped 24% to $0.195.

Tesla sells merchandise such as apparel, belt buckle, mini models of its vehicles including quad bike, called Cyberquad for kids and Cyberwhistle which has been modeled after its much-awaited Cybertruck.

Musk has been a cryptocurrency enthusiast and supporter, and had asked Twitter users in May this year if they wanted Tesla to accept Dogecoin as a currency for purchasing its electric vehicles. He had called Dogecoin a meme-inspired cryptocurrency, during his guest-host spot on the ‘Saturday Night Live’ comedy sketch TV show in May. Dogecoin, much like Bitcoin, is a cryptocurrency but one that has a Shiba Inu dog from a meme as its logo.

The CEO of the EV company had in fact announced earlier this year that Tesla will accept Bitcoin for vehicle purchases but had pulled back the decision after being criticized by many who cited the virtual currency isn't good for the environment. Later in June, he said that Tesla may again start accepting Bitcoin as a mode of payment but at a time when the cryptocurrency is greener.

However, it seems like Musk is again willing to experiment with the idea of accepting a cryptocurrency as a payment. Though not for its electric vehicles this time but as an experiment with its merchandise. Making payments through cryptocurrency, however, may not be quite straightforward, also because these forms of currencies are very volatile. But the fact that the likes of Tesla and Musk have been keeping the interest levels high by references and announcements related to cryptocurrencies, the highs could remain for quite some time to come.