These camera systems are quite important for Tesla as they make a significant part of the EV maker's technological advancement.
By : HT Auto Desk
| Updated on: 12 Jun 2022, 12:45 PM 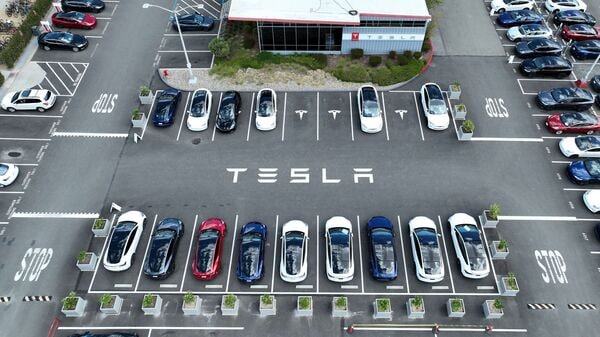 File photo of Tesla cars parked in a lot at the Tesla factory in Fremont, California.

US EV giant Tesla has secured a deal worth $4 billion with electronic components unit of Samsung to supply cameras for the carmaker's self-driving systems, the Korea Economic Daily reported. Samsung won this contract outdoing LG Innotek and Primax Electronics but this isn’t the first time the Korean electronics maker has partnered with the American automaker to make components for its vehicles.

In September of 2021, Samsung was also awarded a contract to supply Tesla with the next-generation Full Self-Driving 4.0 chip while in July, the tech company won a $436 million contract to supply camera modules for a new model, which is rumored to be the Tesla Cybertruck.

(Also read | Tesla proposes a 3-for-1 stock split; Ellison to leave Board)

While LG Innotek will still be supplying 20 per cent of the cameras for Tesla's self-driving system, Samsung will supply the majority of 80 per cent of the units, as per the agreement. These cameras will be used in every Tesla model including Model S, Model 3, Model X, Model Y, and the upcoming Cybertruck.

These camera systems are quite important for Tesla as they make a significant part of the EV maker's technological advancement, and will be utilized for its Full Self Driving system to create imagery for its “neural nets", instead of using lidar or radar like other automakers do.

For its latest version of the FSD, Tesla uses eight cameras with an estimated 1.2 million megapixels. A switch to Samsung cameras could bump that number up to five million megapixels, leading to a huge increase in the quality of the image.

This investment is a part of Tesla's plan to achieve self-driving with solely camera-based vision, despite recent reports that the brand had filed with the FCC to use a new radar system.