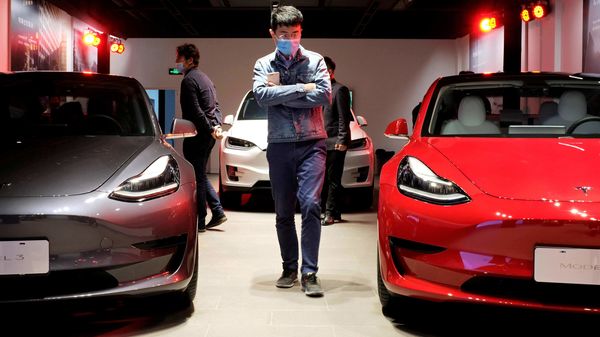 The rout in Tesla Inc. shares has far exceeded the broader market’s decline and wiped out over $230 billion from the electric-vehicle maker’s valuation in the past four weeks.

The surge that helped propel the Elon Musk-led company into the ranks of the S&P 500 in 2020 has turned into a steep decline this year amid a greater push from legacy automakers into electric vehicles. Traditional industry bigwigs including General Motors Co., Ford Motor Co. and Volkswagen AG have all in recent months announced their EV lineups and the intent to aggressively expand into the nascent market.

Tesla’s lofty valuation also took a hit from a broader selloff in high-multiple technology stocks this week. Investors ditched the group amid a rise in Treasury yields, leading to concerns that companies trading at high valuations may not perform up to expectations if borrowing costs surge.

The EV industry leader was among the top decliners in both the Nasdaq 100 Stock Index, as well as the S&P 500 Index on Friday. Tesla’s current market capitalization stands at around $574 billion, a far cry from the high of $837 billion it reached in late January.