Tesla says it is working with authorities in China to put in place epidemic prevention requirements.
By : HT Auto Desk
| Updated on: 17 Mar 2022, 08:25 AM 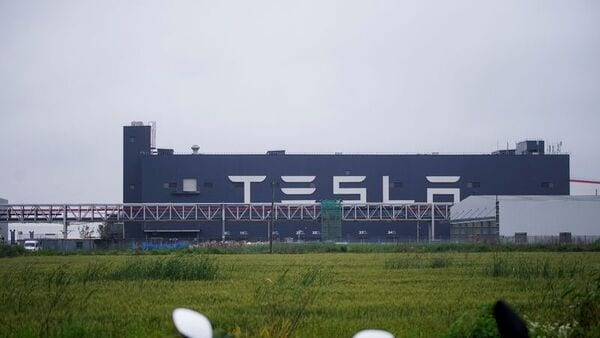 File photo: A Tesla sign is seen at its factory in Shanghai, China,

Tesla has the rather difficult task of keeping production at its facility going as best as is possible while still trying to adhere to the prevention measures announced in China in the wake of rising number of Covid-19 cases. While Reuters previously reported that Tesla has issued a two-day pause at its Shanghai plant, the news agency subsequently referred to a Tesla statement to highlight that production may still be on for the time being.

China has reported more Covid-19 positive cases this year so far than it had in all of 2021. Cities like Shanghai, Changchun and Shenzen are particularly hit, and a number of very stringent curbs and restrictions have been announced to arrest the growing number of cases. While daily life has once again taken a hit for people at large, industries too are either slowing down or pressing the pause button. Shanghai, a major commercial and financial hub, is also home to Tesla's first factory outside of the US and restrictions here can have larger ramifications. "We are actively cooperating with the government's requirements for nucleic acid testing and other epidemic prevention requirements, and at the same time are doing our best to ensure production, overcoming difficulties together," the Tesla statement sent to Reuters reads.

Also referred to as Gigafactgory 3, the facility rolls out Tesla Model 3 sedan and Model Y crossover SUV. The Tesla factory had taken out more than 53,000 units just last month and is the company's base from where it serves not just the local market but markets in Europe as well.

But even if Tesla would much rather prefer production going at full capacity, the company is unlikely to take its chances of going past any rules and regulations spelt out by authorities. In recent times, Tesla has had numerous problems to deal with in China - from questions arising from quality issues to suspicion its cars send sensitive data abroad. And while CEO Elon Musk has clashed with Californian authorities in the past to keep the factory at Fremont open, he is quite unlikely to adopt the same approach for the factory in Shanghai.