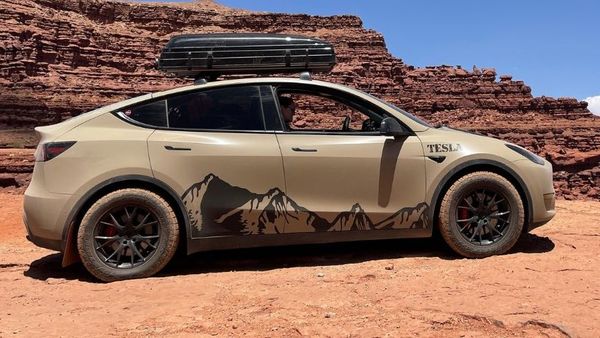 i1Tesla's Brian Jenkins Tesla Model Y after his own customisation.

EV giant Tesla has a huge cult following with numerous fan pages on Twitter and other social media platforms dedicated to the company, and even its CEO Elon Musk. One such fan page recently grabbed eyeballs after it posted a picture of a Tesla Model Y parked on a rocky terrain that almost looked like the planet Mars. Just to make it clear, it is Moab in Utah.

Tesla enthusiast Brian Jenkins, who recently posted a teaser video of his Model Y in Utah on his Twitter page, made some modifications to the electric vehicle. He installed a reworked suspension in the EV to explore its off-road capacity and also pasted some stickers of mountains along the car's body to give an adventurous theme. In fact, the beige-ish body colour customization on his EV contributes to the theme.

The muddy and rocky terrains of Moab can easily be confused with the terrain on Mars. With an illusion of landing on Mars, Jenkins' tweet intrigued a lot of other Tesla fans who showed interest in knowing how the Model Y performed on the off-beat road. The tweet also received a lot of retweets and comments.

Appreciate everyone’s retweets! Here is a short, more of the @Tesla #offroadassist actions. Maybe the vertical view didn’t impress @elonmusk. I’m amazed at what a slightly modified suspension by @MountainPassEV can do! Please retweet https://t.co/1BszLfXPCA pic.twitter.com/Uz2VFC47OD

According to a report by InsideEVs, the Model Y's journey to Moab shows that the electric car is capable of being driven on off-roads with a steady smoothness and silence even while moving at low speeds.

As the market for EVs expands, many electric vehicle owners are now giving a thought to exploring the capabilities of their cars by not limiting these to standard roads or journeys. And these personal updates are only making the idea of owning an EV even more exciting.