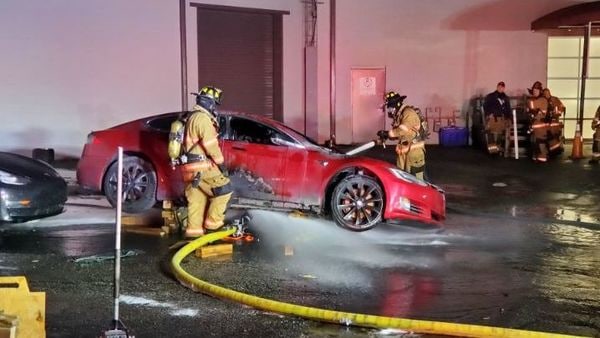 This photograph was posted by City of Marietta on its Facebook page.

Electric vehicles may be the rage in the global automotive scene but time and again, there are reports of battery-powered models catching fire which often casts a pale shadow on the safety of such vehicles. And although these incidents may be far and few, images of a burning Tesla Model S are still likely to raise more than a few eyebrows.

(Also read: Tesla loses fraud case in yet another image setback in China)

This is what happened when a Tesla Model S caught fire recently in the US state of Georgia. The incident was reported in Georgia's Marietta with the images being posted on social media channels. It is reported that the red-coloured Tesla Model S P100D caught fire at a service center. While there have been far more horrific results of an electric car catching fire, this particular incident may have seen a quick response from emergency personnel as this model is, at least, not charred beyond recognition.

It is not yet known what may have caused the fire but the matter is under investigation. What may well be assumed though is that this incident is likely to add fuel to the proverbial fire around electric vehicles being a potential blaze hazard.

Bearing the brunt of its all is Chevrolet Bolt EV in the US. This particular model has received flak big time for several instances of fire outbreak and these have resulted in a large number of recalls. Existing owners are often advised to park their vehicles in open spaces and to not charge the EV to maximum.

Manufacturers which have electric vehicle options are closely looking at such instances in order to ensure safety of their respective models.  At a time when EVs are being touted as the present and the future, and sales are rising to all-time highs in many countries, incidents of fire aren't likely to go down well with many more considering a cleaner and cheaper form of personal mobility.