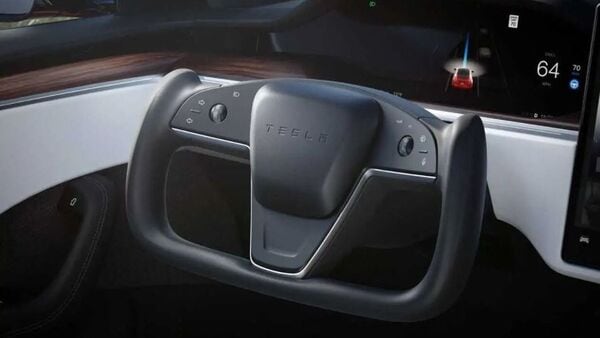 Tesla created a buzz in the automotive market when it introduced a yoke steering wheel in its latest Tesla Model S Plaid. Previously, the EV company has stayed put with its decision and Tesla chief Elon Musk also had stated that there will be no option for a round-shaped steering wheel eventually. However, it is being reported now that the EV major might be having second thoughts about its yoke steering.

As per a report by Carscoops, a hacker might have found that the EV company might be thinking about changing this concept. A Twitter handle named @greentheonly shared a screenshot showcasing a few lines of code that represent the swapping of the yoke wheel. The code has been written as “PROC_GTW_X_STEERING-WHEEL-YOKE-SWAP" and it has been found under a subsystem called “Set Steering Wheel/Yoke Vehicle Configs." This gives an idea that the EV brand might be thinking of giving the buyers an option for a round wheel in the future.

Tesla's Model S and Model X comes with a yoke steering wheel, however, many prototypes of these EVs have been spotted with round steering wheels. Owners of these models have complained about the horn feature that is activated with the help of a capacitive touch button rather than the traditional press of the airbag cover. There have also been prototypes with the conventional horn system that shows that the company is also thinking about this.

Tesla launched its Model S Plaid last year and the company claims it to be the fastest electric vehicle in the world. The electric sedan can zip to the speed of 96 kmph from zero in less than two seconds. It has been priced at $130,000.