Tesla was briefly bigger than even Facebook in late January but all hasn't been well with the EV maker in more recent times.Tesla’s market capitalization hovers around $543 billion, a far cry from the $837 billion mark it touched on January 26.
By :
| Updated on: 20 May 2021, 09:10 AM 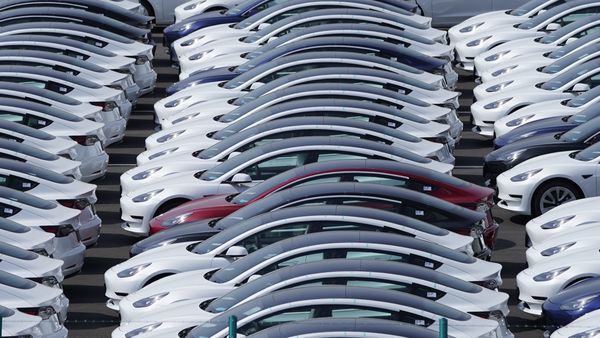 Tesla Inc.’s stock suffered a double whammy on Wednesday with news of lagging sales in China and a sharp selloff in technology and cryptocurrency assets.

Shares in the Elon Musk-led company closed down 2.5% at $563.46, the lowest since March 8. Nearly $300 billion has been wiped from the electric-vehicle maker’s market value since late January, back when it was briefly bigger than social media giant Facebook Inc. Even ardent Tesla bull Cathie Wood’s Ark Investment Management boosting its stake this week has failed to shore up sentiment.

Investor confidence has been eroded by a series of setbacks this month, including crashes in China and Washington, data casting doubt on growth in China’s key auto market and a production delay at Tesla’s German factory. Add to this the threat of competition from legacy car companies and the pressures from a global semiconductor shortage, and it’s not hard to see why Tesla’s shares are headed for their steepest monthly drop since May 2019.

“The stories of the slowdown for Tesla’s China expansion should be a major point of caution for everyone," Roth Capital Partners analyst Craig Irwin said. Investors “should be shocked Chinese media are showing video of the autopilot crashes, and the state is allowing wide sharing of these videos."

The whiplash in cryptocurrency prices caused by Musk’s tweets this month has had a boomerang effect on Tesla shares as well, sending jitters across technology-related assets. Earlier on Wednesday, Musk’s power over the currency was again on display after the Tesla chief indicated the company will be holding on to its Bitcoins despite the current volatility, prompting a rebound in the price of Bitcoin.

“Tesla, for good or for bad, is now heavily tied to the price of Bitcoin, from a perception standpoint," Wedbush analyst Daniel Ives said by phone. “Also this back and forth of Musk on Bitcoin is a sideshow that investors don’t want to sit through."

Tesla’s market capitalization hovers around $543 billion, a far cry from the $837 billion mark it touched on Jan. 26. While Tesla shares have retreated more than 36% from that high, Facebook has advanced more than 11% in the same span, and the S&P 500 Index has gained 6.9%.

Developments that last year helped propel the stock up almost 750%, such as a strong quarterly result and votes of confidence from major investors, are proving no match for the downward momentum in Tesla’s stock in 2021.