Tesla denies firing employees who refused to return to work

Several workers of Tesla recently accused Elon Musk's company of issuing threats of firing if they did not report back to work.The Tesla plant at Fremont reopened on May 11 after a bitter battle with the local authorities over safety procedures.
By : HT Auto Desk
| Updated on: 03 Jul 2020, 09:01 AM 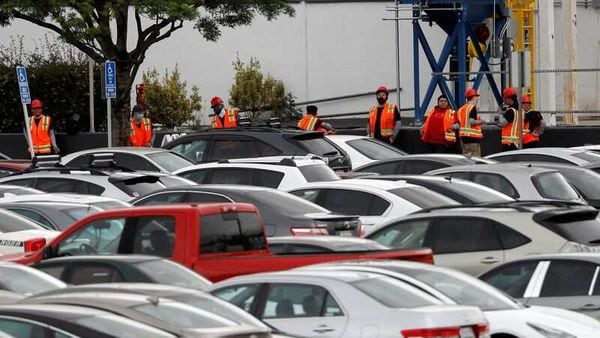 Tesla workers in orange vests are seen outside the company's California plant.

EV-maker Tesla has denied reports of firing its employees who decided not to join work during the coronavirus pandemic over safety concerns at the California factory.

Elon Musk’s company clarified that it had waived attendance for several weeks after getting approval to reopen factories and offered employees "a window of time to stay home no questions asked".

Several workers of Tesla recently accused the California-based company of issuing threats of firing if they did not report back to work despite concerns over their health safety amid Covid-19 pandemic. While the production facility in Fremont was reopened after nearly two weeks of shutdown, some of the workers highlighted safety concerns and opted to steer clear.

Tesla had previously stated that those who wish to remain at home due to health safety concerns can take unpaid leave till May 31. Concerns over safety protocols in place at the factory have, however, meant that many chose to take this option and some now claim that they are being threatened to return. "There are people we are paying to keep us safe, and they’re just turning the other cheek. They should be holding Elon Musk accountable," Carlos Gabriel, a worker at the plant, was quoted as saying by Associated Press.

(Also read: Tesla overtakes Toyota to become most valuable carmaker in the world)

The Tesla plant at Fremont reopened on May 11 after a war of words with the local authorities over safety procedures. Musk would eventually get his way against health department officials of Alameda County after US President Donald Trump stepped in.

Even then, not all workers deemed it was the right time to return to the assembly lines which can often be closely packed. There have been reports that many inside don't wear masks or often skip social distancing protocols. Tesla, however, maintains that strict measures are in place to ensure safety of all.

Tesla CEO Musk is under pressure and this is clear from a number of factors. Model Y crossover SUV production may have suffered roadblocks and he has written to employees to go 'all out' to ramp it up and minimise rectification needs.