Home Auto News Tesla Cybertruck May Be Able To Float 'for A While', Reveals Elon Musk

Tesla Cybertruck may be able to float 'for a while', reveals Elon Musk

Tesla Cybertruck is touted to have superior off-road capabilities.Tesla hopes to start production of Cybertruck by late 2021.
By : HT Auto Desk
| Updated on: 22 Apr 2020, 11:30 AM 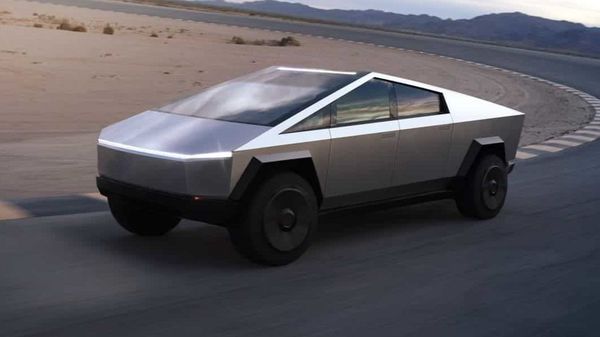 Unlike vehicles running on conventional fuels and with regular engines, the battery-powered Cybertruck may have superior wading capabilities without fears of damage to components.

Is there anything that a Tesla vehicle cannot do? That seems to be the popular sentiment doing the rounds after Elon Musk revealed that the Cybertruck may be able to float in water for short periods of time.

Musk, CEO at Tesla, made the revelation in a reply to a tweet asking about the Cybertruck's wading capabilities. "Have you thought about Cybertruck’s wading depth? I hunt and fish and sometimes need to cross streams. Can I do it without damaging the truck?" asked a user. "Yes. It will even float for a while," Musk promptly replied.

Have you thought about CT's wading depth? I hunt and fish and sometimes need to cross streams. Can I do it without damaging the truck?

The Cybertruck was first showcased by Tesla and Musk at an event in November of 2019. It has been touted as a vehicle with the capabilities of a pick-up, married with the performance of a sports car. It is also claimed to have a robust outer body which would be capable of withstanding extreme hits and shocks. To top it all, being a Tesla means that the Cybertruck will be powered by a battery which could give it a range of around 600 to 700 kms on a single charge.

Musk has also been raving about the Cybertruck's off-road capabilities and has said that it would be able to negotiate challenging terrains with considerable ease.

The first round of pre-orders for the vehicle were completed in quick time and Tesla is hoping to begin production by late 2021. Even Dubai Police, known for its fleet of exotic cars, has placed an order. And while there continues to be a raging debate on the unconventional looks of the Cybertruck, there is no denying that with claims of it being able to float, among others, would make it one of the most exciting offerings from the company.