Earlier, Texas Police in its preliminary report hinted that the Tesla Model S was 'driverless' when the accident took place.The preliminary report once again raised questions on Tesla's Autopilot feature.
By : HT Auto Desk
| Updated on: 27 Apr 2021, 09:16 AM 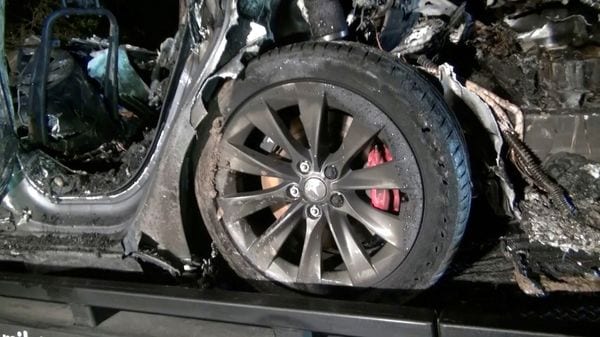 The remains of the Tesla Model S after it crashed in Texas on April 17. (File Photo)

Under scrutiny once again over its Autopilot feature after a deadly crash in Texas, US last week killed two people, Tesla has come up with its own report regarding the accident. The electric car manufacturer said contrary to previous reports, the Tesla Model S involved in the crash did not have the Autopilot feature engaged at that time, and that there are hints that someone must have been behind the wheels of the ill-fated car.

"It was claimed to be autopilot, but this is completely false," Tesla chief Elon Musk said after the EV maker clarified on Monday about earlier reports that the car was not being driven by any person when it had crashed on April 17, killing two people.

Tesla came to the conclusion after a thorough investigation of the wreckage with the federal and state officials. After studying the remains of the car, Tesla claims the auto-steer feature on the Model S was not engaged at the time of impact, and the seat belts were unbuckled after the crash. These findings made Tesla's claim that the car was driven by someone some amount of truth.

According to vice president of vehicle engineering Lars Moravy, "We were able to find that the steering wheel was indeed deformed, leading to a likelihood that someone was in the driver's seat at the time of the crash."

Tesla drew a lot of flak and invited scrutiny after investigators claimed a 'driverless' Tesla Model S had crashed near Houston on April 17 in their preliminary report. The Tesla Model S caught fire after hitting a tree and also killed two people.

A recent study claimed that the Autopilot feature inside a Tesla car can be easily tricked and that the car can be driven without anyone in the driver's seat. The report had put Tesla in a spot.

The preliminary report hinted that the Model S was probably on Autopilot, a semi-autonomous feature that, despite its name, requires a human operator. According to Tesla, the "Autopilot enables your car to steer, accelerate and brake automatically within its lane. Current Autopilot features require active driver supervision and do not make the vehicle autonomous."