The registration of 11,280 China-built Teslas in March represents a fivefold jump from February, according to data from state-backed China Automotive Information Net stretching back to 2018.
By : Bloomberg
| Updated on: 17 Apr 2020, 03:25 PM 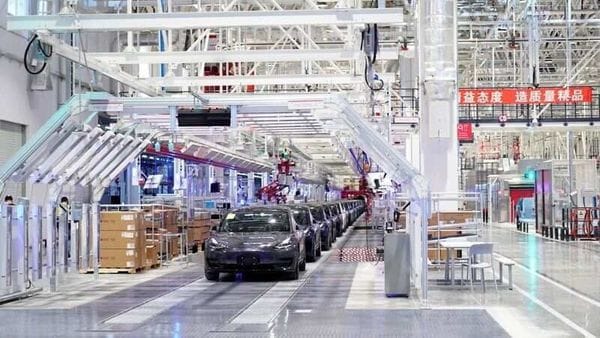 File photo: Tesla China-made Model 3 vehicles are seen during a delivery event at its factory in Shanghai, China.

Registrations of Tesla Inc. vehicles rose to a record last month in China after the electric-car maker resumed production at its Shanghai plant that was temporarily idled because of the coronavirus outbreak.

The registration of 11,280 China-built Teslas last month represents a fivefold jump from February, according to data from state-backed China Automotive Information Net stretching back to 2018. The March figure doesn’t include imports, which weren’t immediately available. Registrations of imported Teslas were 9,273 in March 2019, and 182 this February.

(Also read: Tesla paint shop in Berlin factory will be the world's most advanced: Elon Musk)

The figures suggest Tesla has been gaining traction in China since starting deliveries from its new Shanghai facility, its first vehicle-assembly plant outside the U.S., around the start of the year. The numbers also add to evidence that car demand in China, the world’s largest market, is gradually rebounding following a slump exacerbated by the virus pandemic.

(Also read: Tesla cars will soon reverse park themselves without any human input)

Tesla’s factory in China recovered from a virus-related shutdown quicker than many in the industry, helped by aid from local authorities. After resuming operations on Feb. 10, the Shanghai plant -- Tesla’s only outside the U.S. -- has surpassed the capacity it had before the shutdown, the company has said.