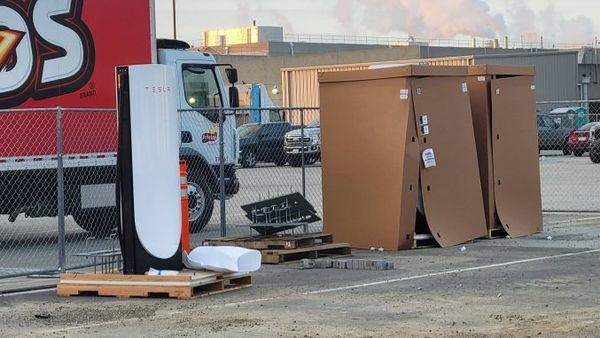 The Tesla Megacharging site which is under construction in Frito-Lady's facility is expected to have four stalls.

US EV giant Tesla has started installing the first set of Megachargers to support the deliveries of its first set of Semi pickup trucks for PepsiCo, Insideevs reported, referring to photos provided by Drive Tesla. The EV company has installed first Megachargers at the Frito-Lay’s facility in Modesto, California.

Tesla is expected to deliver the first batch of the all-electric Class 8 trucks to PepsiCo soon. Though it was expected to happen before the end of 2021 as hoped by the beverage company's CEO Ramon Laguarta, it is now expected to happen in January. PepsiCo has placed an order for 100 of Tesla's electric trucks so as to reduce fuel cost bills and eliminate carbon emissions from its fleet.

(Also read | Tesla increases price of self-driving software to $12,000 in the US)

The Megacharging site which is under construction in Frito-Lady's facility is expected to have four stalls and, high power output of up to 1.5 MW, The report stated, citing Drive Tesla. The chargers are combined with a Megapack energy storage system that will prevent the peak electricity surges from the grid.

Tesla has already installed a Megacharging station at its Giga Nevada battery gigafactory, where the Semi was reported to have entered limited production last month. Even though mass production of Tesla Semi is not expected until 2023, there is reportedly progress going on on the Semi pickup EV project.

Late last month, Karat Packaging - a specialty distributor and manufacturer of environmentally friendly, disposable foodservice products and related items, also announced that it might induct Tesla Semi pickup trucks to its fleet. The company might expand its fleet of 86 trucks and trailers with 10 Tesla Semis, a report by Motor 1 stated.

Tesla Semi electric vehicle claims to be capable of running 805 kilometres on a single charge and will be able to tow 80,000 lbs.