Even though mass production of Tesla Semi is not expected until 2023, there is reportedly work going on on the Semi pickup EV project.Tesla is expected to deliver the first set of Semi EVs to PepsiCo by the fourth quarter of this fiscal.
By : HT Auto Desk
| Updated on: 13 Dec 2021, 10:59 AM 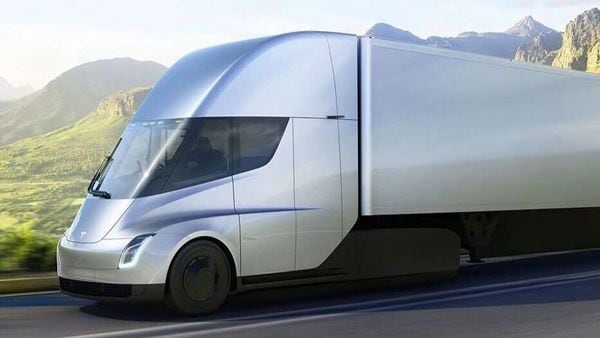 Tesla Semi promises to be a game-changer in the fleet and transport sector.

The long-awaited Tesla Semi pickup has entered limited production at the EV giant's Giga Nevada site, Insideevs reported, citing an unofficial report by a Tesla enthusiast. The new vehicle was recently spotted and recorded in a flyover video while performing some basic tests at the factory backyard, sans a trailer. These tests included acceleration, braking and turning around in circles.

While the mass-production of the Semi has been pushed to 2023, it isn't surprising that the EV maker is looking at producing limited units of the vehicle. Tesla is expected to deliver the first set of Semi EVs to PepsiCo by the fourth quarter of this fiscal and thus limited production of the vehicle makes sense.

Even though mass production of Tesla Semi is not expected until 2023, there is definitely work going on on the Tesla Semi pickup project, the report stated. Tesla has already installed two Megachargers at its Nevada Giga factory for charging the Semi trucks while even PepsiCo has received a permit for a Megacharger installation at its own site in California, the report revealed.

It is not yet known where the Tesla Semi would be produced in volume and when exactly would the mass-production start.

Tesla Semi electric truck claims to be capable of running 805 kilometres or 500 miles on a single charge and will be able to tow 80,000 lbs. The truck could even come with a higher payload capacity as compared to its diesel-powered counterparts. It also claimed that the electric truck will not break down in its first million miles of running. Tesla Semi is also claimed to offer an efficiency of more than 0.80 km per kWh, through its aerodynamics and powerful electric powertrain.