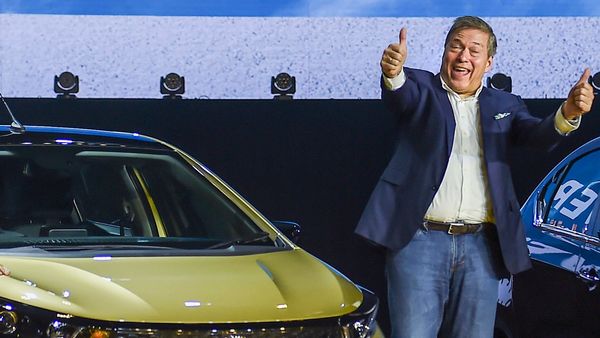 File photo of Guenter Butschek, CEO and MD, Tata Motors, at the launch of Altroz in Mumbai.

Tata Motors on Tuesday announced it had recorded a massive 103% jump in bookings and 90% rise in passenger vehicles' retail this Navratri, compared to the same period in 2019.

The festive period has come as a shot in the arm for several car manufacturers and Tata Motors in particular may have benefited from the launch of several new products in the Indian market, including the Altroz hatchback. The company has been highlighting its product portfolio that has seen a sea of change over the past several years. It also recently announced hitting the four-million mark in cumulative production since inception back in 1991 when the Sierra SUV was first launched.

(Also read: What festive cheer? Why prospects for two-wheelers may be dimmer than for cars)

The going in recent times, however, has been as tough for Tata Motors as it has been for other major players in the Indian automobile industry. The shift to BS 6 and technology upgrades had a bearing on performance in 2019 when demand too was comparatively muted. 2020 may have offered hope but the Covid-19 outbreak and consequent lockdown resulted in new and unprecedented challenges.

And while the PV segment in the country is on the cusp of a turnaround and the festive season bringing some cheer, there may be more that needs to be done. Tata Motors last week had said a cut in GST would go a long way in easing woes of the entire PV industry. "Due to this transition from BS 4 to BS 6, there has been a significant escalation in cost. In these trying times customers are not very confident about the outlook how the future is going to be including their salaries and jobs," Tata Motors President, Passenger Vehicles Business Unit, Shailesh Chandra, told news agency PTI. "On top of that there has been an increase in vehicle prices. It definitely impacts the industry immensely and any support by the government to reduce GST to offset some of the price increase will definitely boost the whole PV industry."

PTI also reported last week that Tata Motors is actively scouting for a partner for its passenger vehicle business 'in order to be ready for growth in the next decade.' (Full report here)