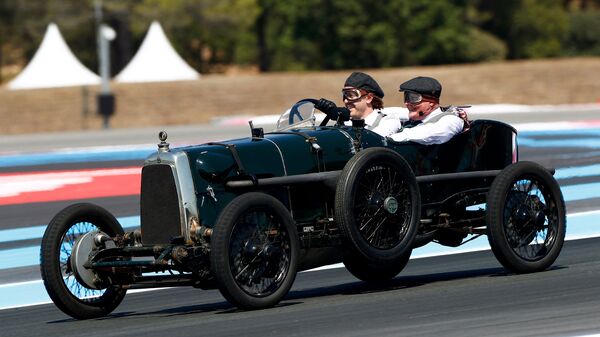 Aston Martin marked the centenary of its maiden challenge at the 1922 French Grand Prix as four-time world champion Sebastian Vettel took the original Green Pea for a spin on the track for a celebratory lap.

Vettel was seen dressed up for the occasion, with a shirt, grey waistcoat, tie and tie pin, vintage glasses and a hat on his head to drive the iconic Green Pea on the track. He started the engine of the TT1 Green Pea Grand Prix and headed out onto the track, enjoying a few laps in the century-old yet charming green car.

The Green Pea, Aston Martin's first racing car, returned to the track exactly 100 years after its debut, which also took place on transalpine soil in Strasbourg. The car had an unfortunate F1 debut as it was forced to retire due to engine failure when he was placed fifth overall.

The Green Pea was built by founder Lionel Martin. He was commissioned by racing driver Count Louis Zborowski, who invested £10,000 in the development of an entirely new 16-valve twin overhead cam four-cylinder race engine. TT1 and another model called TT2 were originally slated to take part at the 1922 Isle of Man event. Zborowski was behind the wheels when the Green Pea made its debut at the French Grand Prix on July 15 that year. He later went on to design ‘Chitty Bang Bang’, a car which inspired the book, film, and stage musical called Chitty-Chitty-Bang-Bang.

The debut race for Aston Martin's Green Pea took place four years after the end of the First World War. Called the Great Sports Week of Strasbourg, it took place from July 9 to 19, 1922 hosyed by the Grand Prix of the Automobile Club de France. The race saw as many as 18 cars participate. They had to follow very precise regulations which included a minimum weight of 650 kgs and a maximum cylinder capacity of two litres.

Besides Aston Martin's Green Pea, the other cars that participated in that race 100 years ago were Fiat 804, Bugatti Type 30, Ballot 2LS, Sunbeams and Rolland-Pilain A22 among others. The race distance was set at 60 laps which spanned over 800 kilometres.