The state government on March 1 had implemented the new legislation after relaxing the norms for six months in two consecutive phases.
By : PTI
| Updated on: 02 Mar 2020, 05:52 PM 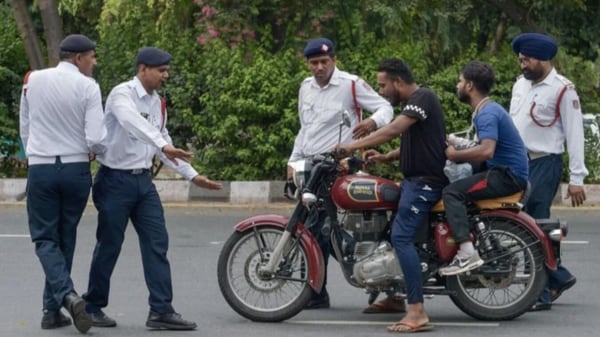 The Odisha government has collected a fine of ₹1.06 crore from traffic rule violators on the first day of implementing the amended Motor Vehicles Act, 2019, officials said.

The penalty was collected by the staff of Regional Transport Offices (RTOs) and police since Sunday.

The state government on March 1 had implemented the new legislation after relaxing the norms for six months in two consecutive phases.

While 126 persons were penalised for triple riding on bikes, 49 people had been fined for talking over mobile phones while driving.

Ten persons were penalised for driving on wrong routes, 1,831 others were caught while driving without helmets, 349 for not wearing seat belts, 24 people for drunken driving and 277 for over speeding, they said.

Of the total ₹1.06 crore collected from the violators, the RTO officials collected ₹88 lakh as penalty from 1,785 people, while the police issued challans of ₹18 lakh to 2,112 people for flouting traffic rules.

Odisha's Commerce and Transport Minister P N Behera said, the officials engaged in implementing the new MV ACT, 2019 have been instructed to behave properly while collecting penalty from the violators.

Meanwhile, the opposition Congress demanded that the amount of penalty imposed for violation should be reduced as in Gujarat and some other states.

"We will call for a mass movement if the government does not slash the penalty amount in 15 days," said Congress MLA Suresh Routray.

He said, traffic rules should be relaxed on humanitarian grounds for students going to examination centres and people on way to hospitals.

In a statement, the State Transport Authority has said that a fine of ₹5,000 will be imposed on persons driving without proper licence while one has to pay ₹10,000 if the driving licence is invalid or put on suspension.

The highest penalty of ₹25,000 is being imposed for underage drivers, while ₹2,000 will be collected from vehicle owners for driving without having valid insurance.

According to the MV Act, the RTO and police can impose a fine of ₹10,000 on drivers if they are found not giving way to emergency vehicles such as ambulance or fire tenders.