Rivian will go where even Tesla doesn’t dare 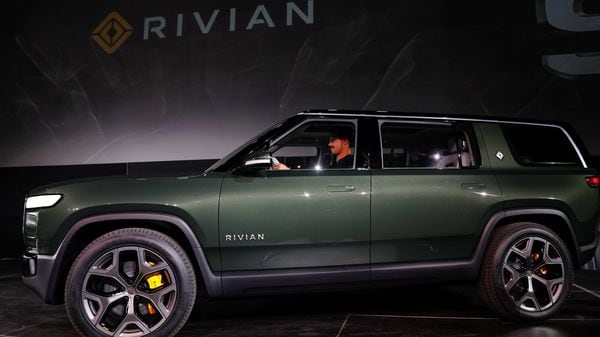 If — or, more likely, when — all the business books start to drop about Rivian Automotive Inc., at least one should be titled: Do All the Hard Things at Once. The young company is currently trying to finish a factory and three different vehicles, while planning a road trip to a Wall Street IPO. Apparently, Chief Executive Officer R.J. Scaringe was still getting a little too much sleep, because Rivian two weeks ago announced a plan to build its own charging network as well, à la Tesla.

The decision, which Scaringe has hinted at for years, comprises at least 3,500 fast chargers at 600 sites and at least 10,000 slower-charging “waypoints" at campsites, motels, hiking trailheads, and the like — all installed by 2024. It’s a hugely expensive capital project: The hardware alone in building a fast-charging site can cost up to $320,000, according to one study, to say nothing of maintenance and other soft costs. In short, Rivian’s go-it-alone strategy is a quiet indictment of U.S. infrastructure: What’s out there at the moment, apparently, is not nearly enough.

Tesla opted for the same kind of proprietary network, but that was nine years ago. The non-Tesla charging map has grown denser in the time since, but pins are still thin beyond urban centers, and the center of the country is blanketed with electron deserts.

At the moment, Tesla has 9,723 fast-charging cords in the U.S., according to the latest Energy Department tally. The other networks combined have just 7,589 outlets for public charging, and those are far less widely scattered. The Tesla club is covered in Millinocket, Me., Athens, Ala., and Casper, Wyo.—all places where Ford’s juiced-up new Mustang Mach-E may struggle to run free. While this is a challenge for Ford, it’s a bigger obstacle for Rivian’s “Electric Adventure Vehicles," ostensibly headed to places more wild than the Santa Monica farmer’s market.

There’s good reason for the anemic charging map. The microeconomics for a public charging network are still kind of brutal. Profits won’t appear without a lot of EV traffic; EVs won’t appear without a lot of chargers. But on a micro-micro level, there’s another variable in the equation: Chargers sell cars. Elon Musk saw that clearly a decade ago. When Rivian plants a charger in an electron desert like North Dakota, the revenue in return flows through a thicker pipe than it does for a charging empire that’s only selling the electricity.

Indeed, a look at the Rivian map colors its sales ambitions. It has a slew of chargers planned for Alaska, Hawaii, and the Upper Peninsula of Michigan. Even Prince Edward Island and Nova Scotia will see stations. “We can be really creative in terms of locations," Scaringe told TechCrunch in December, “so it can allow us to get to places that are very specific and unique to Rivian."

What’s more, Rivian plans to hand Amazon.com the keys to 100,000 delivery vans in the coming decade, including 10,000 by the end of next year. No doubt, the retail giant would like to deploy (and charge) those rigs widely. Meanwhile, non-Rivian vehicles will be able to use the company’s slower chargers, another potential revenue stream. “Over-demand is a nice problem to have," says BloombergNEF analyst Ryan Fisher, and there’s value in locking up prime charging locations before EVs infiltrate the country’s more remote places, he adds.

The incumbent auto industry hasn’t been as adventurous, but it has yet another variable in the equation: gas-powered revenue. These cars can still sell vehicles in places such as North Dakota, where chargers are sparse. As such, the industry has largely decided to jury-rig its own charging networks, essentially cobbling together a patchwork of interoperability agreements with third-party networks. Ford Motor Co., for example, connected in 2017 with Electrify America, the charging network Volkswagen established as part of the settlement of its Dieselgate emissions cheating scandal. (The public charging networks became even more important this week to Mach-E owners, as Ford stopped selling its $799 home chargers because some weren’t working properly.)

Finally, Rivian has to think carefully about the long haul — specifically the big, squishy calculus of brand value. The company has spent 12 years crafting the capital behind its name, and almost every step has been deliberate — from producing seven-minute snowboarding films to popping up in an Aspen gondola for an impromptu interview. It’s also hiring “guides" who will be personally assigned to liaison with individual buyers.

Now, on the cusp of putting product in the wild, it would certainly be easier and cheaper to outsource charging to some third-party plug in a motel parking lot, but that would be out of step with the company’s approach to date. Charging will be a huge part of the Rivian’s UX, arguably as important as the lights, the acceleration, and the nifty “camp kitchen" that slides out from under the pickup bed. Apparently, to Scaringe and company, the reward — the potential savings of skipping the proprietary network — isn’t worth the risk.