Legacy carmakers won't get much help financing their climate conversion and it's going to be painful.
By : Bloomberg
| Updated on: 15 Feb 2020, 09:30 AM 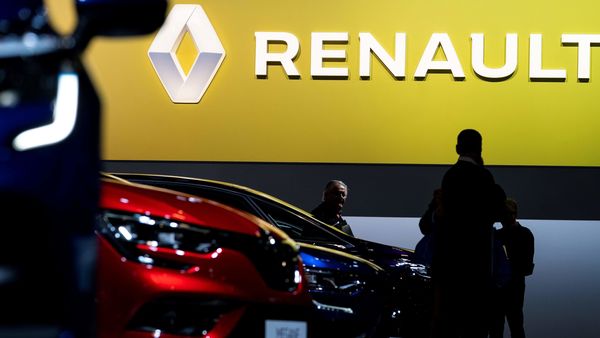 (FILES) In this file photo taken on January 09, 2020 people visit the Renault stand during the Brussels Motor Show in Brussels. - French carmaker Renault went into the red last year, the first time in a decade, with net losses of 141 million euros (USD 152 million) due to lower sales and a falling contribution from its Japanese partner Nissan. (Photo by Kenzo TRIBOUILLARD / AFP)

On one side of the Atlantic, Tesla Inc. is capitalizing on its soaring share price by selling $2 billion in stock so it can build more electric vehicles. On the other, French manufacturer Renault SA has been forced to cut its dividend by 70% and announce a big reduction in fixed costs so it can afford to do the same.

Dwindling profits and Renault’s drastic remedies were mirrored this week by its Japanese alliance partner Nissan Motor Co., as well at Daimler AG. (Renault has an engineering partnership with Daimler and owns a small stake in the German car and truck maker.) Their problems aren’t identical but all three had expanded their workforces in anticipation of demand that hasn’t materialized and now they have to tighten their belts to pay for expensive electric vehicles, for which demand remains uncertain.

Renault’s shares are near their lowest level in eight years, which means the company is capitalized at barely 10 billion euros ($11 billion), a sum that includes the 43% stake Renault owns in Nissan. Needless to say, that’s a sliver of what Tesla is worth, even though the U.S. company’s annual output is still almost a rounding error for the Renault-Nissan alliance.

This juxtaposition sends a crystal clear message: Carmakers that grew fat and happy producing combustion engine vehicles won’t get any help from the stock market now that they’ve decided to embrace an electric future. Instead the gasoline gang are going to fund these changes themselves and it’s going to be painful, for both employees and shareholders.

Long-established automakers have decided that their salvation is to be found in alliances and partnerships, which spread the cost of developing expensive technology over a greater number of car sales. It’s why Renault tried to merge with Fiat Chrysler Automobiles NV, before Peugeot-owner PSA Group beat them to it.

But in Renault’s case its links to other manufactures are amplifying its problems right now, not solving them. Relations with Nissan fell apart when former alliance boss Carlos Ghosn was arrested and remain fragile now that he’s free to settle scores. Both sides have since hired new CEOs but their shareholders aren’t yet ready to buy the story that harmony has been restored.

With its own profits slumping, Nissan can’t afford to pay big dividends to Renault and the French are also earning less from the Daimler partnership. The upshot is that Renault is a bit squeezed for cash — net cash at the automotive unit dwindled to just 1.7 billion euros at the end of December (though gross liquidity, including available credit lines, was a more respectable 16 billion euros).

One way Renault could free up some money would be to sell part of its Nissan stake, which might have the added benefit of helping to re-balance the alliance in Nissan’s favor, something the Japanese have long sought. The trouble is Nissan’s shares have halved in value over the last two years so selling now wouldn’t provide Renault with nearly as much as it once would. Interim CEO Clotilde Delbos all but ruled out such a move on Friday.

So it’s no wonder that Renault has opted to drastically scale back its own dividend and will try to cut costs by 2 billion euros in the next three years. Delbos, who’s also the chief financial officer, didn’t go into much detail about how those savings will be delivered but the company plans to review its “industrial footprint," which suggests plant closures are a possibility. (Alliance partner Nissan has already announced 12,500 job cuts, while Daimler is targeting at least 10,000.)

But unlike at Tesla, Renault doesn’t have a queue of wealthy supporters clamoring to help fund this epochal clean-vehicle transition. One way or other, employees and existing shareholders will end up paying.