Tesla has announced that it will not launch any new models this year and the production of Tesla Cybertruck has been delayed again.Tesla Cybertruck made its debut in 2019.
By : HT Auto Desk
| Updated on: 30 Jan 2022, 06:03 PM 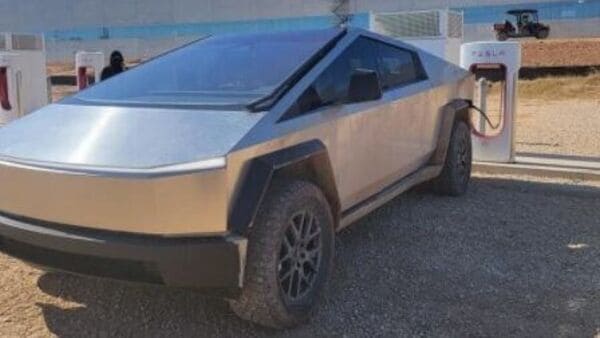 The Tesla Cybertruck was spotted at Tesla Giga Texas' Supercharger.

A prototype of Tesla Cybertruck has been spotted for the first time at a Supercharging station and the picture of the same has been posted on Twitter by Drive Tesla. The photo was taken at the Tesla Giga Texas' Supercharger where one can see the electric pickup truck is getting charged.

Tesla has not revealed how much time will the Cybertruck take to get charged, however, it is being guessed that it will be at the maximum level of the Superchargers as the electric vehicle will sport a very large battery, potentially 200 kWh or more. It is also being speculated that the EV company may increase V3 Supercharging output to 324 kW and further introduce a V4 version that will offer higher power.

The latest Tesla Cybertruck getting some electrons at Giga Texas ⚡️⚡️

Also confirms the location of the charge port @elonmusk

It has been a while that Tesla enthusiasts have been waiting for the electric pickup truck to launch, but the EV maker recently announced that it will not bring any new EV models this year. Tesla chief Elon Musk stated ongoing semiconductor shortage is the reason behind the decision. “We have enough on our plate right now, quite frankly," Musk had said.

After its introduction in 2019, Tesla Cybertruck was expected to hit the market this year, however, due to the company's decision the production of the electric truck has been pushed again. Production of Tesla Semi and the new Roadster has also been delayed.

The EV company has aimed to build 50 per cent more electric vehicles this year compared to 2021. It also has plans to build more Gigafactories around the globe. Tesla delivered 9,36,000 vehicles last year, which is nearly double in number compared to 2020. It earned a massive revenue of $ 5 billion from its deliveries last year.