To pool resources more efficiently, Volkswagen Chief Executive Officer Herbert Diess has put Porsche at the center of the group’s luxury portfolio spanning Bentley, Bugatti and potentially Lamborghini, which is currently still part of Audi.
By : Bloomberg
| Updated on: 17 Mar 2020, 10:05 AM 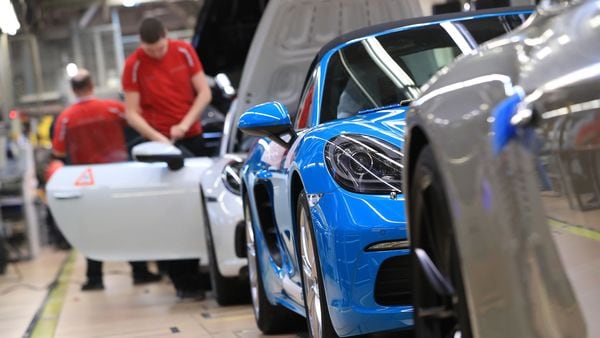 While parts of the original plan are still under discussion with unions, the maker of the iconic 911 sportscar needs to do more to remain competitive, Chief Financial Officer Lutz Meschke said in an interview.

“We need a toolbox of measures we can activate as soon as conditions change," Meschke said. “It’s important that we are always able to react, including in a crisis scenario, instead of resorting to rushed actions."

The coronavirus effects threatening European supply chains hit manufacturers at a critical time as the industry reels from slowing global demand, tariff threats and stricter emission regulations. The challenges only add to pressure to protect Porsche’s financial muscle as parent VW powers up a 33 billion-euro spending binge to electrify the group over the next five years.

Still, the brand is sticking with its long-held goal to generate profit margins of at least 15%, more than twice as much as most VW group sister brands generate. Meschke reiterated the margin can fall below this threshold temporarily if a major crisis hits.

Meschke, who stirred controversy two years ago by commenting on the potential of a possible initial public offering of Porsche, said such a move “must remain an option." He didn’t offer an indication that anything concrete is in the works, but pointed out that investors favor specialized companies like Ferrari or Tesla Inc. over conglomerates. “The preference is reflected in the valuations," Meschke said.

In China, Porsche sees a gradual recovery from the coronavirus outbreak that hurt sales in its largest market. March should see a gradual recovery for the brand there, followed by a further stabilization in April, Meschke said. But recouping all the lost sales during the course of the year will be difficult.

The Asian country is by far the largest market for electric cars, another key initiative for Porsche. The brand, which started selling the battery-electric Taycan at the end of last year, expects to meet stricter emission rules in all its key markets and will add more electric cars as customer demand is robust.

“From today’s perspective there is no way around electric mobility in the next 10 years," he said. More than half of Porsche’s global deliveries are forecast to be fully or partly electric in 2025.Europe has set a fleet average of 95 grams of carbon dioxide per kilometer driven, less than half the 254 grams spewed by the latest 911 Turbo S. But with 5% of a manufacturer’s fleet excluded from the calculated average this year, and strong consumer appetite for Porsche hybrids, sales of at least 20,000 Taycan sedans in 2020 should help the sportscar maker offset the combustion-era guzzlers.

The Taycan’s basic floor structure –- the so-called J1 platform -- will spawn additional models, and Porsche is considering a separate underpinning for an electric version of the 718 Boxster roadster, Meschke said. A final decision hasn’t been made yet.Porsche’s joint effort with sister brand Audi on electric-car technology for models including the Macan SUV helps save 30% in development cost, he said. Deeper collaboration within the VW group and teaming up with technology firms in key markets will also keep Porsche competitive in a fundamentally-changing competitive landscape where software plays a key role, he said.