Pakistan inks deal with China, to launch electric vehicles and buses this year

To be launched in two phases, the Chinese company will invest $50 million in the first phase, while in the second phase manufacturing of the electric buses would be started.
By : HT Auto Desk
| Updated on: 27 Aug 2020, 12:14 PM 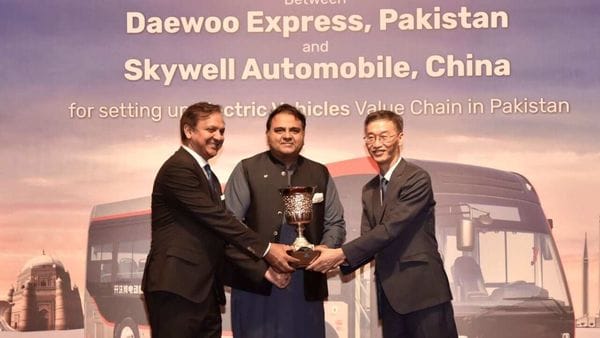 Pakistan's minister of Science and Technology during the signing of the deal between Daewoo Express and Skywell Automobile. (Photo courtesy: Twitter/@@fawadchaudhry)

Pakistan’s Daewoo Express and China’s Skywell Automobile has signed a deal to collaborate and launch electric vehicles, including public transports like electric buses, this year.

Pakistan’s minister for Science and Technology Fawad Chaudhry took to Twitter to announce that the deal will shape the ‘future of public transport in Pakistan’. He also said, "From this year, electric buses will start running in Pakistan, and in three years, these buses will start being completely manufactured in Pakistan."

Under this Strategic Alliance Agreement, Skywell Automobiles and Daewoo Express will collaborate to introduce electric buses and other electric vehicles in Pakistan and create a technical support base in the country. Skywell Automobiles will provide its state of the art electric buses for the Pakistan market in Phase-1, and in Phase 2, shall set up a manufacturing plant to produce electric vehicles in Pakistan.

The Skywell Automobile CEO, speaking through a video link, said such an agreement between Pakistan and China would help build the automobile industry of Pakistan on modern lines and open new avenues for energy-based vehicles. "We are striving for promoting new energy vehicles policy in Pakistan. Electric special vehicles and logistics can have a big share in the global markets," he said.

"We have seen in Peshawar’s BRT buses and now from hybrid to electric buses regime. Above all, its impact on our environment would be quite positive," said Sheriar Hussain, Daewoo’s representative.

During the ceremony, Fawad Chaudhry also assured that work on electric bikes and three-wheelers vehicles was on cards, and a policy for four-wheelers will also be finalised within days.