With founder Trevor Milton mired in controversy and having resigned as Chairman, Nikola is looking at a sure-and-steady style now.A revised deal with General Motors is evidence, many say, of Nikola ditching its previously grand plans.
By :
| Updated on: 02 Dec 2020, 06:49 AM 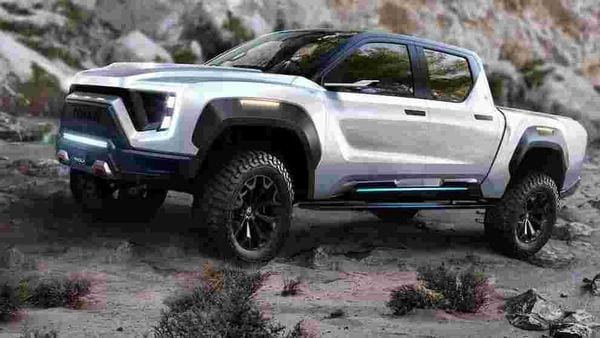 File photo of Badger which is expected to be Nikola's answer to the Tesla Cybertruck. (Photo courtesy: nikolamotor,com)

Since taking the wheel at Nikola Corp. in September, Mark Russell has been adamant the electric-truck startup doesn’t need a deal with General Motors Co. to survive. Now he has to prove it -- and fast.

On Monday, the two companies unveiled a deal that is, in the eyes of many investors, more akin to a standard supply contract than the strategic partnership Nikola’s founder and ex-Chairman Trevor Milton envisioned when he cut a tentative agreement three months ago -- days before resigning from the company under a cloud.

The agreement is, in essence, a repudiation of Milton’s grand ambitions and sets the company on a path more in line with Chief Executive Officer Russell’s sure-and-steady style: tapping GM’s expertise in hydrogen fuel cells and possibly batteries for its planned line of semis. The sexiest parts of the original pact were absent -- a GM stake in Nikola, and a GM-built pickup truck called the Nikola Badger -- as was any praise from GM CEO Mary Barra, who had previously called Nikola “an industry-leading disrupter."

Investors were disappointed to see those elements disappear and they dumped Nikola shares frantically on Monday, extending their plunge from a June peak to almost 75%. Now the 58-year-old Russell, described by friends as unassuming but confident, must regain the market’s trust by showing Nikola can actually produce vehicles by executing on its vision with the tools already in place.

“The revised GM deal makes much more sense for Nikola long term," the CEO said in an emailed statement.

Nikola shares pared an early decline of as much as 18%, trading down 15% to $17.42 as of 10:45 a.m. in New York on Tuesday. Selling restrictions on certain Nikola insiders and investors ended on Monday, freeing up a large chunk of shares of its float for public trading that may put further pressure on the already depressed shares. A block of shares equivalent to 1.9% of the float traded at the 9:30 a.m. market opening. 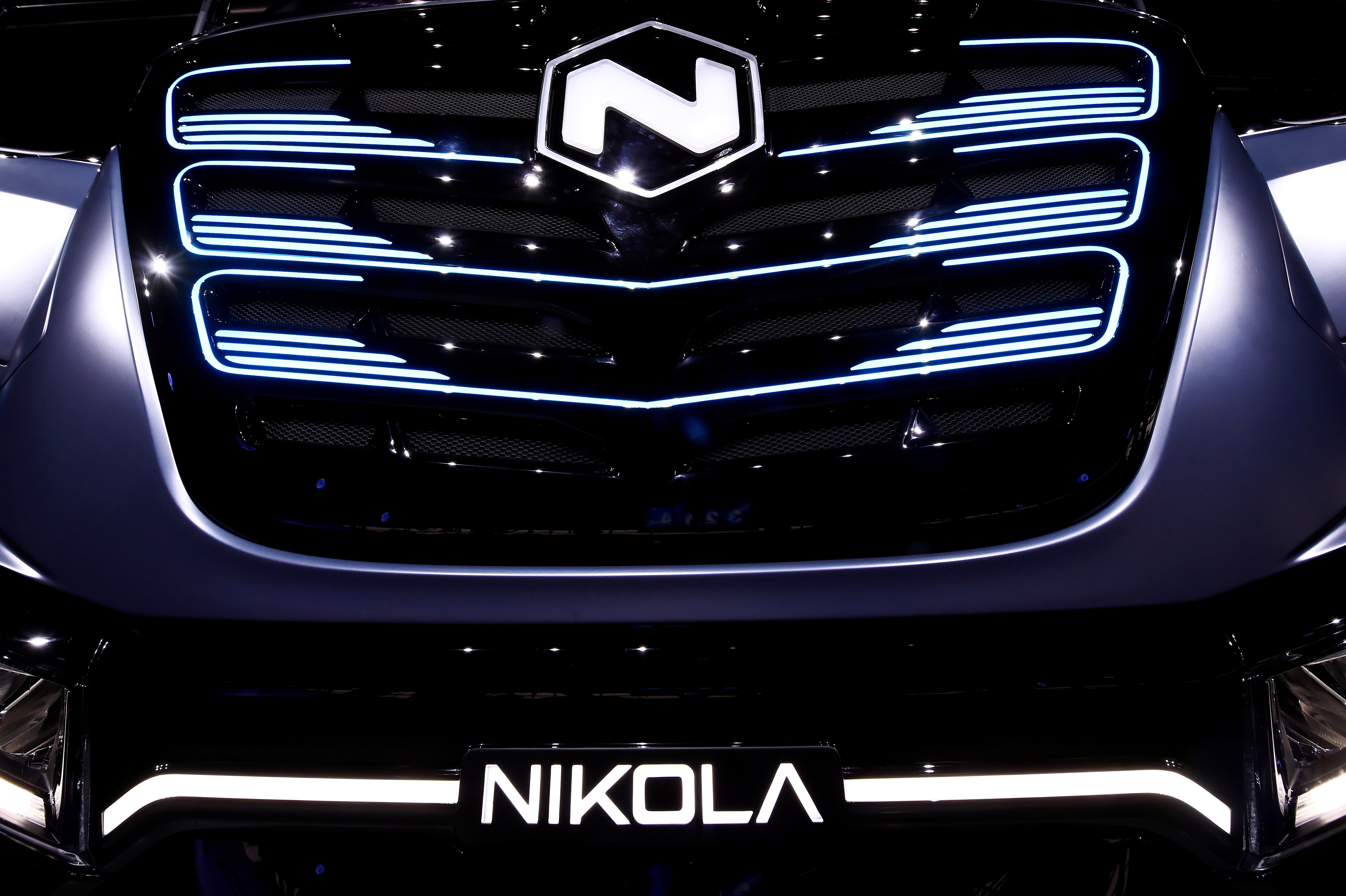 File photo - Nikola's logo is pictured at an event in Turin, Italy. (REUTERS)

Russell was thrust into the spotlight when Milton bowed out after a short seller accused him and the company of deception. Milton and the company have denied misleading investors, but Nikola’s stock price has yet to recover from the blow. The no-nonsense Russell, who became CEO in June and took full directional control of the company three months later, now has to turn Milton’s dreams of a hydrogen-powered future into a real business.

Despite having little of its own technology, Nikola went public in a June reverse merger after a $700 million deal with VectoIQ, a blank check company started by former GM Vice Chairman Steve Girsky. Buoyed by a wave of investment in electric vehicle startups and Milton’s cheerleading, its valuation soared as high as $28.7 billion at one point -- briefly hovering above that of Ford Motor Co.

Russell, who speaks in measured tones and eschews publicity, is a study in contrasts with the outspoken Milton, who bragged the Badger would outsell the Ford F-150, hammed it up on stage at Nikola events and was an avid user of social media -- before deleting his Twitter and Instagram accounts. Russell is a process-oriented manager who earned his stripes in Ohio’s gritty steel business. Milton likes flying small planes while Russell prefers nature hikes. He isn’t on Twitter, Instagram or even LinkedIn.

“Mark is ‘Mr. Detail’ who knows all the automotive suppliers," said John Tumasoz, who runs Very Independent Research and has been following Russell’s career for more than a decade. “He is not visionary. He’s the opposite of what Trevor is viewed as."

A battery-electric semi truck is due to go in production as part of a joint venture with Iveco by the end of next year in Ulm, Germany. Nikola also has a factory under construction in Coolidge, Arizona, where it hopes to build a fuel-cell semi truck by the end of 2023. To power those trucks, the Phoenix-based company hopes to move forward on building hydrogen fueling stations across North America, with ground-breaking on the first sites scheduled for the second quarter.

When Russell was promoted to the role of CEO, he took over a company that had only a few of the pieces in place it needed to execute on all of its plans. But he was happy to take a back seat to Milton, the driving force behind Nikola’s aggressive strategy.

Now, with investors raising questions about the company’s ability to deliver and the relationship with GM under scrutiny, Russell is focusing on a few core priorities -- even if that means abandoning a high-profile retail market vehicle like the Badger.

“You might be amazed at how much my priorities and my focus is unchanged through all of the interesting last, you know, couple of months," Russell said in an October interview.

Russell joined Nikola in early 2019, six months after stepping down as president and chief operating officer of steel products manufacturer and automotive supplier Worthington Industries Inc. No official reason was given for his decision to leave that Columbus, Ohio-based company at age 55, but it came after Russell realized he would be passed over for the CEO role in favor of Andy Rose, who then served as chief financial officer, according to people familiar with the matter.

Worthington declined to comment on Russell’s departure but Rose praised his former colleague in a statement.

“Mark is very entrepreneurial. He made a significant impact on Worthington over the 11 years he spent with us," he said. 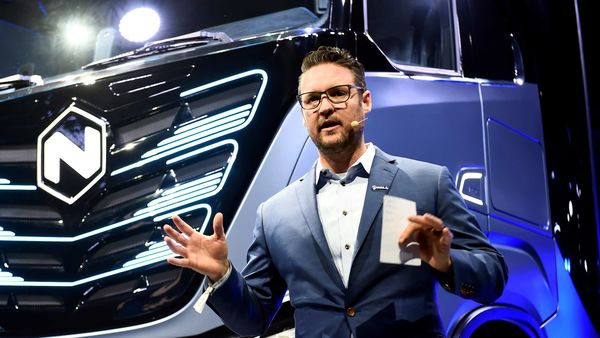 Russell’s arrival at Nikola marked something of a reunion with Milton, who briefly worked at Worthington for less than a year after it acquired one of his earlier start-ups. Milton left in 2014 to found Nikola -- but got a subsequent $2 million seed investment from Worthington that has become very valuable to a company with significant operating losses and falling sales.

Russell was elevated to Nikola’s CEO role at the urging of several key pre-IPO investors, including Fidelity Investments, according to people familiar with the decision. The investors pushed to replace Milton with Russell in that job as part of changes that included removing Milton’s father from the board, according to the people, who asked not to be named because the discussions were private.

While they liked Milton’s vision, the investors saw Russell as a better day-to-day operator and custodian of their cash, the people said. That view of Russell as a cool-headed manager is shared by some analysts on Wall Street.

“We view Mark as a tactician and more of a blocking-and-tackling CEO, which is exactly what Nikola needs at this critical juncture," Wedbush analyst Dan Ives, who has an underperform rating on the stock, said in a recent email before Monday’s announcement.

Russell’s background is largely in metals. Prior to joining Worthington’s Steel unit in 2007, he ran an aluminum products acquisition group for three years. He was also at the helm of the now-defunct aluminum extrusion company Indalex Inc. between 2002 and 2004.

“He was a breath of fresh air, really smart, really good and moral. If he said the wall is black, it was black. There’s no gray there," Peter Karmanos, a Worthington Board member since 1997 said in an interview.

Like Milton, Russell was born in Utah. He earned an integrated studies degree from Weber State University in Ogden, Utah, and a law degree from Brigham Young University’s J. Reuben Clark Law School. He practiced law for eight years before joining an aluminum company.

Russell is deeply committed to his faith in all aspects of his life, according to Brad Agle, a professor of ethics and leadership at Brigham Young University’s Marriott School of Business. The pair first met in Pittsburgh in the late 1990s at a religious congregation near Pittsburgh and have remained close friends ever since, Agle said.

Russell has rarely missed a day of reading the Bible or other scriptures since he was 16. Once on an international flight, he realized he hadn’t read any religious passages that day, so Russell walked down the aisles asking aloud if anyone had a book of scriptures he could borrow.

Russell’s stake in the company is valued at about $514 million, including options, according to Bloomberg calculations. He owns the shares directly and through an entity called T&M Residual, which Russell and Milton jointly own.

Russell manages the T&M shares independent of Nikola, the company said. He recently agreed, along with several other unspecified strategic shareholders, to extend the lockup on those shares, it said.

The CEO has been careful in recent weeks to avoid commenting about the tenure or current views of Milton, who remains the largest single investor in Nikola and whom Russell lauded a year ago when he called working with Milton “a dream come true."

Russell has said he was instrumental in getting Worthington to make its investment in Nikola and remains a true believer in its mission.“There’s a chance to help make the planet cleaner and more sustainable by solving one of the toughest nuts to crack here, which is long-haul, heavy transport," Russell said in the October interview. “That’s why I helped convince Worthington to be the seed investor and to get this thing started with Trevor years ago."