Nikola has announced that it would scuttle one of its marquee vehicles, an electric and hydrogen-powered pickup called Badger.
By :
| Updated on: 01 Dec 2020, 08:49 AM 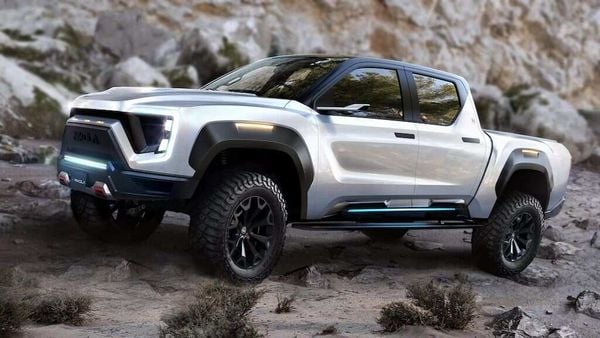 Photo of the Nikola Badger that has a claimed range of 600 miles. (Photo courtesy: nikolamotor,com)

General Motors Co and Nikola Corp on Monday announced a reworked agreement on a fuel-cell partnership that eliminates an equity stake in the startup for the Detroit automaker as well as plans for building Nikola's electric pickup truck, sending Nikola shares tumbling more than 24%.

In September, the companies announced a deal under which GM would supply batteries, a chassis architecture, fuel cell systems and a factory to build Nikola's proposed Badger electric pickup in return for an 11% stake and $700 million.

But the deal came into question after a short seller criticised Nikola as a fraud, something Nikola has denied.

The new agreement, a non-binding memorandum of understanding that doesn't expire until the end of 2021, is subject to negotiation and a definitive deal, Nikola and GM said in separate statements.

Under the new deal, GM will supply its fuel-cell system for Nikola's Class 7 and Class 8 commercial semi-trucks, Nikola said. The companies are also discussing Nikola's potential use of GM's Ultium electric battery system in its commercial trailers.

Nikola officials said the new deal focuses on the fuel-cell side of the business, where they see the greatest potential. They also said they remain confident of signing a deal by year end with an energy partner to build hydrogen-refueling stations.

JP Morgan analyst Paul Coster in a research note said the decision by GM not to take a stake in Nikola as originally planned would weigh on Nikola's shares, but longer term, the new agreement was positive for the startup as it can now focus on its commercial truck business.

Nikola said it would refund all previously submitted order deposits for the Badger as that rollout was dependant on a manufacturer partnership. Nikola officials said the Badger was "paused indefinitely" as the company focuses on its core business.

“Heavy trucks remain our core business and we are 100% focused on hitting our development milestones to bring clean hydrogen and battery-electric commercial trucks to market," Nikola Chief Executive Mark Russell said in a statement.

GM said Nikola will pay upfront for the capital investment necessary for the fuel-cell capacity. The fuel-cell system will be engineered at GM's technical facilities in Pontiac and Warren, Michigan, and built at its Brownstown Charter Township battery plant in Michigan.

“Providing our Hydrotec fuel cell systems to the heavy-duty class of commercial vehicles is an important part of our growth strategy," GM global product development chief Doug Parks said in a separate statement.