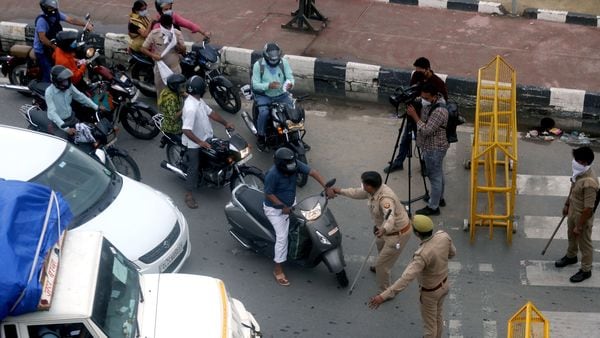 Police personnel stop commuters at Delhi Noida Border after it was sealed during the two day lockdown imposed by the state government to curb the spread of coronavirus. (File photo)

Owners of more than 2,000 vehicles were penalised across Noida and Greater Noida on Tuesday and seven people arrested for allegedly violating curbs imposed due to the COVID-19 pandemic, Gautam Buddh Nagar police said.

Also, five vehicles were impounded for similar violation during a 24-hour period till Tuesday night in Gautam Buddh Nagar, which has recorded 3,614 positive cases of COVID-19 and 33 deaths linked to the disease so far, according to official figures.

Criminal Procedure Code (CrPC) Section 144, which bars assembly of more than four people, is in force in Gautam Buddh Nagar, whose urban areas fall in the 'Red Zone' for COVID-19.

"Six FIRs were registered and seven people arrested for violating the curbs. A total of 4,839 vehicles were checked across 200 barrier points in the district and challans issued to 2,040 of them, while five were impounded," the police said in a statement.

Altogether, ₹1,73,900 were collected in fines during the action, the police said.

The Noida-Delhi border continues to remain sealed for movement except for essential services and people having passes issued by the district administration, according to officials.