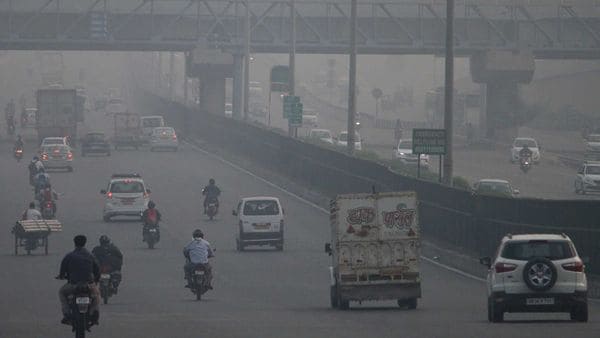 Vehicles moving at Delhi-Gurugram Expressway amid smog, in Gurugram on Thursday. (ANI PHOTO)

Union Minister Nitin Gadkari on Thursday asked the Uttar Pradesh government to expedite land acquisition for developing national highways, as is being done in some of the states.

He called for quick disbursal of land acquisition compensation for expediting the National Highway (NH) projects in the state, the Ministry of Road Transport & Highways said in a statement.

Gadkari was speaking after virtually inaugurating and laying the foundation stones of 16 NH projects with a total length of over 500 km worth ₹7,477 crore in Uttar Pradesh on Thursday.

Today, there are over 11,389 km of NHs in the state, and roads worth ₹1.3 lakh crore are being constructed in UP.

(Also read: Meerut to Prayagraj in under 5 hours? Ganga Expressway project to start in 2021)

He said that as much as ₹26,000 crore have been disbursed towards land acquisition cost in the state during the last three years adding that upgradation and development of NHs will improve connectivity to all the districts and major cities of the state.

The minister also "called upon the Uttar Pradesh government to exempt toll plaza agreements from stamp duty in the state."

Gadkari said, Central Road Fund (CRF) works worth ₹15,439 crore have been sanctioned since 2014 in the state. He said ₹4,628 crore was released till last year under the scheme, while another over ₹287 crore was sanctioned in the current year and approval for releasing ₹280 crore more has been given.

The minister assured that the amount will be released soon after receiving proposals from the state.

The minister said, NH works amounting to ₹2 lakh crore are being undertaken in UP.

Gadkari informed that construction of 133 km 4-lane greenfield project worth ₹3,652 crore between Ghazipur-Ballia-Mazhighat is under consideration.

Detailed project report (DPR)is also being prepared for the 98 km 4-lane Prayagraj Ringroad costing ₹7,000 crore. It will be made in three phases, under the first phase, a 27 km greenfield bypass from Dandupur to Sansor will be constructed at a cost of ₹2,500 crore. This will include a 25 km bridge over river Ganga.

Uttar Pradesh Chief Minister Yogi Adityanath also addressed the event. He said, the people of UP are indebted to the Centre for having prioritised it for development.

He said, the new roads will be a boon for the people as these will provide all-weather connectivity in the state.