Nissan Magnite was launched in December of 2020 and has seen a strong demand for it.Magnite is offered in two petrol engine options and with manual as well as CVT.
By : HT Auto Desk
| Updated on: 05 Apr 2021, 10:37 AM 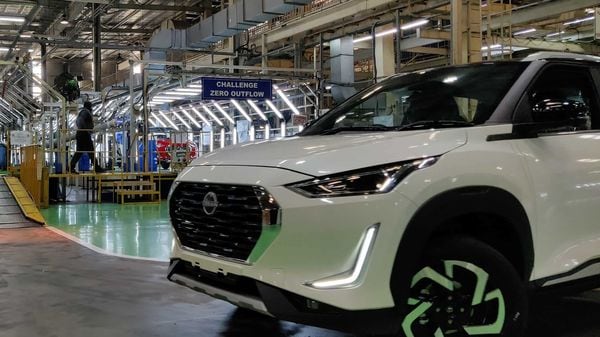 A Magnite makes its way around the RNAIPL facility.

Nissan Magnite continues to fare strong in the Indian car market with the company recently hitting the production milestone of 10,000 for the sub-compact SUV at its RNAIPL facility in Oragadam near Chennai. While waiting period for Magnite continues to span several months, Nissan has managed to up production of the vehicle and had previously added another shift to meet with the scale of demand.

Magnite may have made news for being the most-affordable sub-compact SUV at the time of its launch but a number of features it has on offer, has contributed to it becoming a firm favourite in its segment. As such, the company had received 15,000 bookings in just the first 15 days since it was launched.

Under the hood of the Magnite is a 1.0-litre naturally aspirated petrol that makes 70bhp and has 96 Nm of torque. It is mated to a five-speed manual transmission box. But it is the 1.0-litre turbocharged petrol engine that may well be the better option as it has 97bhp and 160Nm of torque on offer, along with the famed CVT box.

A unique addition to the Magnite was and is also the optional Tech Pack. In a possible bid to keep prices low and yet offer features like ambient light, wireless charging and more, Nissan offers the Tech Pack at an additional cost of around ₹38,000.

In all, there are five main variants of Magnite - XE, XL, XV, XV Premium And XV Premium (O), while the car is also offered in eight colour choices which include four in dual-tone hues.

In many ways, Nissan Magnite has been seen as a do-or-die product for the company in the country. But with passing months, it has been able to establish itself as a formidable player which has been able to hold its own against a long list of established rivals like Hyundai Venue, Maruti Suzuki Vitara Brezza, Tata Nexon, Toyota Urban Cruiser, Mahindra XUV300 and the newly-launched Renault Kiger.