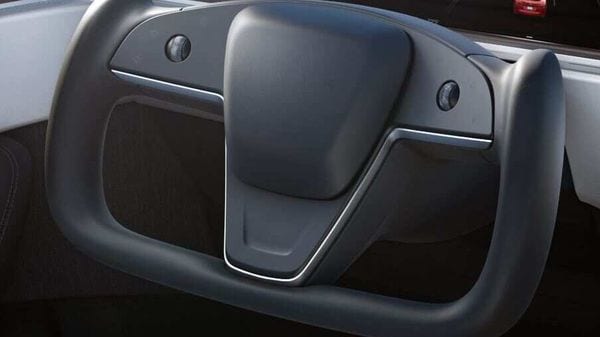 It is a massive change but is the steering wheel on the updates Tesla Model S legal?

The new Tesla Model S and Model X’s cabin come with a host of new technologies and design revisions. There is no conventional steering wheel and no stock. The gear selector too is absent. Instead, the car gets a predictive digital gear selector.

As Tesla CEO Elon Musk previously said, the new generation of Tesla models get digital gear selector and there is an override function available that can be availed from the touchscreen infotainment system. The new generation Tesla cars guess the drive direction based on what obstacles it sees, context and navigation map.

Ok, so this is how u change gears on the new S/X 🤔😎@elonmusk @tesla pic.twitter.com/dXtsSzQBAS

In the latest video that emerged online, the manual override function of the new Tesla Model X and Model X came visible. As per the predictive gear selection technology, the car tries to figure out whether the driver wants to go forward or back and decides accordingly.

If the driver doesn’t agree with the predictive gear selection technology’s decision, he or she can manually select the direction via the large touchscreen. All he or she needs to do is swipe up the gear symbol up for going forward, and drag it down for reverse.

With the stocks gone, the indicator functioning of the new Tesla Model X and Model S are yet to be disclosed. However, it can be presumed that there would be a technology onboard that will predict the direction of turning of the car and light the indicator accordingly. There would be a technology similar to the manual overriding for automatic gear selection, which would allow the driver to indicate manually by using the touchscreen.

The new Tesla Model S and Model X are already creating hype with their new interior, features, and technologies. There would be the much-anticipated Version 11 software onboard the Tesla Model S premium electric sedan.