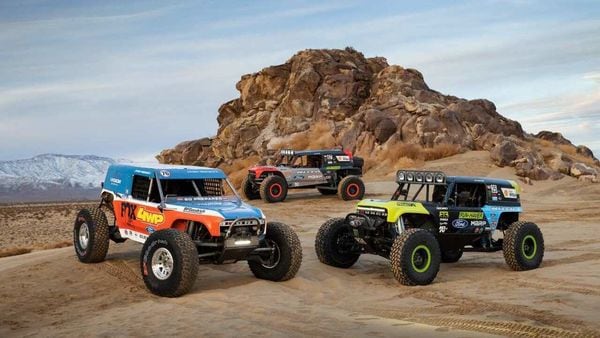 King of the Hammers is a series of off-road races and rock-climbing events spread over 96,000 acres of sunbaked sand dunes, dry lake beds, and boulder fields in Southern California’s remote Johnson Valley. The Bureau of Land Management sanctioned this year’s event, held Feb. 2–6, despite the pandemic.

More than 600 racing teams use modified stock and extreme off-road “trophy trucks" to compete for the title of king or queen over grueling runs that combine high-speed racing and low-speed rock crawling. They drive up hills with names like Chocolate Thunder and down ravines like one called Back Door. Each year the routes change to exact maximum pain and technical challenge.

At night the courses are wide open so any fan can test her or his mettle. Racer.com called the 2019 event “a bit surreal but also the very essence of communal experience … adventure, dirt and the freedom to enjoy both."

Hammertown is the center of the circus. Filled with vendors selling burgers and pizza, the pop-up city supports the tens of thousands of spectators (and their ATVs and RVs) who arrive for the event. Temperature checks and negative Covid-19 tests were required to obtain a wristband for entering, although by some estimates only 20% of those inside its gates wore masks.

And although KOH, as the event is called, brings together the oft-fractured off-road racing community in a rubbing-shoulders-with-the-everyman kind of way, like that Nevada arts festival, money makes an appearance.

Ford Motor Co.’s enormous compound sat at the town center. The Bronco brand had vehicles for ride-alongs and on display, including the Bronco R Race Prototype, a model that recently finished the grueling Baja 1000 endurance race in Mexico and served as a test bed for the brand’s new production SUVs. The Bronco Sport, which won its class at the 2020 Rebelle Rally, also had a presence.

Randy Slawson and his team, Bomber Fabrication,[cd: explain that Slawson makes these himself?] won the king title and a considerable lump of prize money in the main event on Feb. 6. But on the whole, Ford by far carried the biggest hammer.

In a move that bolstered the company’s recent commitment to focus on trucks only, and underscored just how lucrative the $90 billion truck business is, Ford splashed in with an all-star lineup of Bronco teams and drivers, including Formula Drift Champion Vaughn Gittin Jr., two-time KOH winner Loren Healy, and three-time winner Jason Scherer. They each drove Broncos in the Ultra4 4400 unlimited class (there are dozens of divisions and classes across six main races in the KOH pantheon); Gitten placed the highest of the Bronco group, finishing fifth.

The finish was almost besides the point; the Broncos themselves received all of the attention.

Each of the KOH Broncos came with some customized add-ons: a tubular chassis with massive off-road tires and long-travel shocks, a high-powered customized V8 engine, and custom 4x4 driveline system. They used complicated and bespoke three- and four-speed automatic transmissions that can be shifted manually, not the seven-speed manual or 10-speed automatic transmissions available on the production vehicle. Each cabin came race-prepped with the first-ever FIAoff-road certified “Pro Pacer XL ORV" race shells from Recaro, a well-known and long-standing racing seat manufacturer.

Regular weekend warriors can’t buy those particular Broncos, but the customized rigs did act as training mules on the KOH proving ground and hype beasts for the brand. Ford has already hinted at hundreds more overlanding accessories it will offer from more than a dozen different manufacturers, like a deployable table on the rear swing gate, splash guards, and special underbody “armor" to protect the car's bodywork and paint.

A spokesman for Bronco declined to specify how much money Ford spent on the KOH booth and displays,including the trucks. But in a letter to the media, Mark Grueber, Bronco’s marketing manager, said the Bronco KOH race trucks proved Ford’s substantial commitment to innovation in the “red-hot off-road racing scene."

Texas is still America’s truck capital, accounting for almost 1 in 8 pickup sales, but California is No. 2. And that barren desert terrain was a platter served up directly to Ford’s most naturally inclined customer.

It’s all part of tapping into the larger expansion of the highly lucrative light truck industry. (Pickups in particular are highly profitable, with each one sold carrying an average $10,000-plus in profit.)

In May 2020, the truck segment dominated by Ford, General Motors, and Fiat Chrysler pickups beat car sales in the U.S. for the first time. Ford’s F-150 pickup drives the market with an almost 40% slice of the pie.

On Feb. 2, Ford announced it would invest an additional $1.05 billion to expand operations in South Africa building its smaller Ranger trucks, among the most successful vehicles on the global front. (Eagle-eyed car bros have already spotted a camouflaged Ranger Raptor, the more expensive and higher-performance version, on public roads driving around next to an also-camouflaged Bronco Warthog test car.) The next day, Ford said it’s overhauled the bigger F-150 Raptor with a beefier suspension, optional 37-inch tires, and a twin-turbo V6 engine for high-speed off-roading. The company calls the new model, coming this summer, its very own “trophy truck."

“Recreational off-road is a very hot segment right now," David Whiston, an auto analyst at Morningstar Inc., told Bloomberg in the understatement of the week. [cd: cut? we don’t typically editorialize on analysts’ opinions, do we?]

In North America, Ford has recently become the official truck and SUV of Score-International Off-Road Racing, which holds the Baja 500, Baja 1000, and San Felipe 250 championships in Mexico. Ford also serves as the official vehicle of the Best in the Desert race series in the U.S. It sets up the 117-year-old automaker to dominate the space that Jeep has owned since the Moab Chamber of Commerce in Utah started the Easter Jeep Safari Rally in 1967. Jeep, by the way, didn’t have an official presence at KOH 2021.

That week in Johnson Valley, Ford was so dominant that one woman felt the need to articulate plainly just how her vehicle stood out from the pack. The bumper sticker on the back of her rig: “This is not a Bronco."