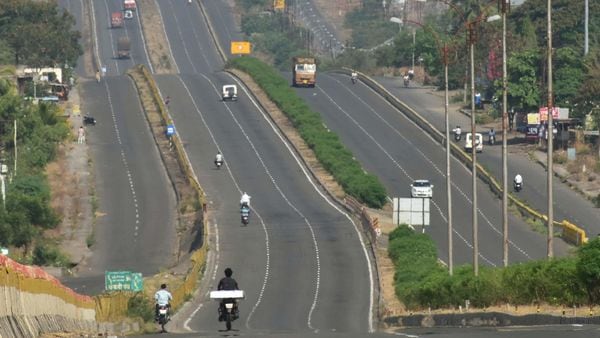 Union Road and Transport Minister Nitin Gadkari said Thursday that Mumbai-Delhi Greenfield Expressway Mumbai-Delhi greenfield expressway would be extended to the Jawaharlal Nehru Port Trust (JNPT). Earlier this expressway was to be built only up to Thane city.

The Mumbai-Delhi highway will be India's flagship greenfield expressway. Spanning 1,275 km, it will be an eight-lane highwa with the provision to expand it into 12-lanes in the future.

The greenfield expressway will help the distance between Delhi and Mumbai to be reduced by about 220 kilometres. At the same time, vehicles will be able to run on this highway at a speed of 120 km per hour. Funds of about 7000 crores have been approved for construction of this road of the state.

A network of 75-way side amenities is also planned on either side of the expressways at an interval of 50 kilometres. Gadkari said that the cost of this project has been increased by about ₹5801 crore. He said, "The annual plan for national highway works in Maharashtra was approved for ₹2,727 crore. I got it enhanced to ₹5,801 crore, which will improve and develop 1,035 km of national highways in the state."

The National Highways Authority of India (NHAI) had earlier proceeded to form a Special Purpose Vehicle (SPV) Company to finance the construction and operation of the Delhi-Mumbai Greenfield Expressway which is projected to be completed by March 2024.