The boost in sales of Tesla electric vehicles come despite a significant increase in prices across model range.
By : HT Auto Desk
| Updated on: 28 Mar 2022, 01:40 PM 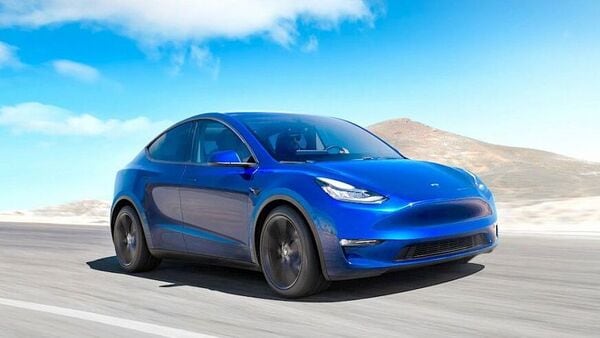 With the increasing popularity of electric vehicles and increase in prices of gas, Tesla electric vehicles are selling like hot cakes in the US. The EV giant recently updated its delivery timelines for new vehicle orders and it mentioned that most models from the company including Model Y are sold out entirely until 2023, Electrek reported.

The boost in sales of Tesla electric vehicles come despite a significant increase in prices across model range. In fact, the company has has a strong backlog of orders, especially for the Model Y electric SUVs. The base version of the Model Y, which now sells for $63,000, will now be delivered between January 2023 and April 2023, according to the online configurator.

Tesla usually enables faster delivery of vehicles if a customer orders more options such as bigger wheels, the Full Self-Driving (FSD) package, or the Performance Version. However, a new order even with any of those options will still push the order to the second half of the year.

The delivery timeline for Tesla Model 3 is comparatively more lenient. The base version of the Model 3, which is Tesla’s cheapest vehicle starting at $47,000, is still getting a delivery in 2022 for new orders, around July and September. the delivery can be received one month faster by adding the 19″ wheels, which are $1,500 more expensive. Another one month can be gained by upgrading to the Model 3 Long Range whereas the Performance version is listed as being delivered in June–July 2023.

Recently, the company's CEO Elon Musk shared that Tesla wants to strengthen its position as the leader of electric vehicles globally and hence, the brand is aiming to sell more EVs than it does now. Tesla is expanding by building more manufacturing units around the world and also has plans to set up more. The EV company is setting a target to sell around 20 million EVs per year by 2030.