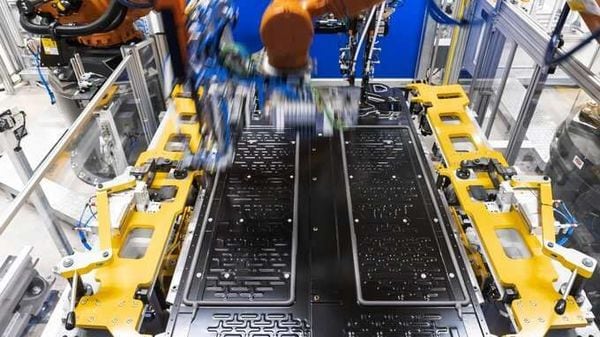 Mercedes-Benz has already revealed several EQ-badged cars - EQA, EQC, and EQV. But, all of these electric cars are just electric versions of the GLA, GLC, and V-Class respectively. However, the EQS is the first ground-up EQ badged car from Mercedes-Benz. This is going to be the flagship sedan of the brand.

The Mercedes-Benz EQS will go on sale in August 2021 in the European market first. It will be followed by the smaller models like EQE, crossover variants of EQS and EQE, as the carmaker has claimed. All these electric cars will be underpinned by a scalable modular architecture that is adaptable in terms of wheelbase, track, and battery packs as well.

The #MercedesBenz #EQS will celebrate its world premiere on April 15. In the meanwhile we started the production of its high-performance battery - with a range of more than 700 km.

The Mercedes-Benz EQS will come with a high-tech cabin. There will be a hyperscreen infotainment system that combines three different screens into a massive bezel that spans the entire width of the dashboard. The screen acts as the instrument cluster and entertainment system as well.

Despite carrying the S lettering, the EQS is unlikely to look anything like the current S-Class sedan. The car will come with a smooth and fluid look. There will be a rounded roofline and short overhangs at both ends. The carmaker claims EQS’ teardrop shape will help the sedan cut through the air more efficiently.

5 lakh charging stations around the world

Mercedes-Benz has already teased the EQS electric sedan. It seems the carmaker has partnered with Ionity for the charging infrastructure. As the carmaker claims, under the Mercedes Me Charge initiative, the EQS owners will be able to simply hook up their car to the charging port and the process will commence.

Under the initiative, there will be 5 lakh charging points across the world, among which 2 lakh will be in Europe only. These charging locations will support integrated payments allowing automatic debit using the owner’s selected method.

The carmaker also claims that the EQS' navigation system will inform the owners whether an EV charging site supports Mercedes Me Charge or not.