Mercedes-Benz has found out that 227 units of EQS and S-Class have a glitch in their MBUX infotainment screen where drivers can use non-essential apps while driving.A similar issue has been observed in Tesla units after the latest updates where one can play video games while driving.
By : HT Auto Desk
| Updated on: 12 Dec 2021, 10:20 AM 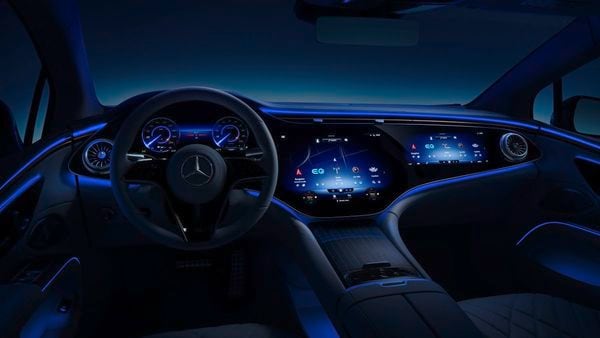 Mercedes-Benz has found out that 227 units of its flagship model S-Class and EQS can allow multiple functions and applications to be used while driving. As it is not the intention of the automaker, it has issued a voluntary recall.

According to a National Highway Traffic Safety Administration (NHTSA) document, the luxury automaker started an investigation of the issue last month. It discovered that some of the MBUX infotainment system's functions and applications were not deactivated as intended when an internal used unit was driven. The company's investigation showed that an incorrect configuration was available on the Mercedes-Benz's backend server that might have been installed on the vehicles with an active and connected Mercedes me connect account.

One can accurately guess that this glitch can pose a safety risk to the driver of the vehicle as well as other road users if he or she diverts their attention towards the infotainment screen. The potential of risk becomes much higher as Mercedes-Benz EQS comes with a massive MBUX Hyperscreen that covers the dashboard.

The automaker stated that it does not have any reports of crashes or accidents due to this issue. The glitch is going to get resolved over the air update and hence owners will not have to visit dealerships. This is an important move as these high-tech vehicles come with huge infotainment displays with numerous features that can easily distract a user while driving. As these infotainment screens are laced with the latest apps, to help drivers get not distracted while on the road, automakers should find a way to deactivate non-essential apps while the vehicle is on the move.

A similar issue has been observed for Tesla units where after the latest software update, passengers and possibly drivers can play video games at the central screen. NHTSA has contacted the EV company regarding this.