The E-Class LWB continues to be the highest selling model for the brand.Mercedes said that there has been an 'overwhelming' response to the newly launched A-Class Limousine, and its deliveries are already full for next two months.
By : HT Auto Desk
| Updated on: 07 Apr 2021, 04:09 PM 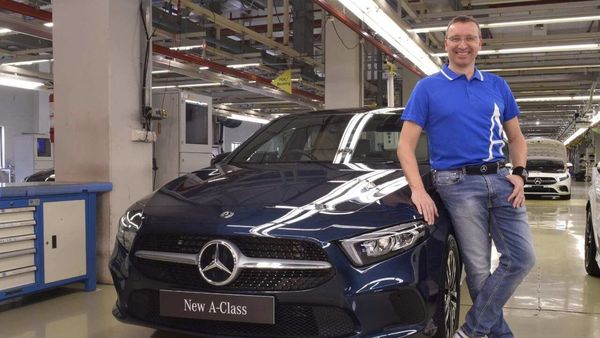 Martin Schwenk, MD and CEO at Mercedes-Benz India, is seen with the new A-Class Limousine.

While most other carmakers bank on the performance of its SUVs to boost their sales these days, Mercedes-Benz India shows that sedans are not dead yet. The German luxury carmaker clocked an impressive 34 per cent year-on-year growth in the first quarter of the year. More than half of the cars Mercedes sold in the first three months of 2021 are sedans.

Mercedes-Benz India has issued a statement saying that the carmaker sold 3,193 units between January and March this year, which is a 34% increase over the same period last year when it could sell only 2,386 units. However, it needs to be considered that India went into a nationwide lockdown from third week of March, which had impacted Mercedes' sales towards the fag end of that quarter last year.

According to Mercedes-Benz India, the E-Class long wheelbase sedan, the facelift version of which was recently launched in India at a price of ₹63.6 lakh and will be offered in both petrol and diesel engines, continues to be the highest selling model for the German carmaker in India in the first three months. Mercedes says that the facelift version of the E-Class LWB has already started receiving strong customer response.

In terms of sales, the E-Class is followed by the C-Class sedans. Among the SUVs, the Mercedes GLE has emerged as the top selling model for the carmaker between January and March this year. The Mercedes sedans have outperformed the SUVs by contributing around 53 per cent of the German auto giant's sales in India in Q1.