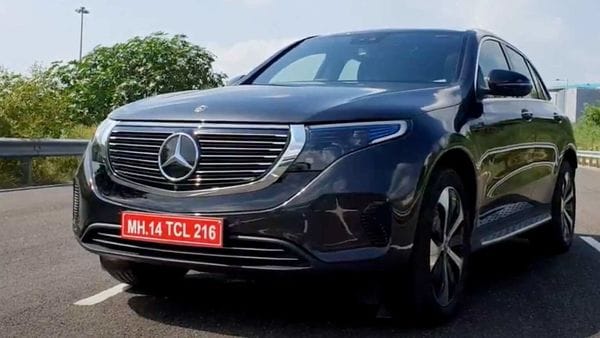 Mercedes-Benz EQC will be the first EV to launch in India from the German giants. (Photo - Sabyasachi Dasgupta)

Mercedes delivered about 160,000 plug-in hybrid and fully electric cars in 2020, with the fourth quarter accounting for roughly half of those deliveries, Daimler Chief Executive Officer Ola Kallenius told reporters Thursday. He had cautioned in the past that meeting the emissions target would be a close call.

Total retail sales of Mercedes cars rose 0.2% in the last three months of the year, according to a Friday statement, as deliveries in China climbed 22%.

“The good trend we’ve seen in the third quarter continued in the fourth quarter driven by China, but not only China as other markets improved as well," Kallenius said of overall demand. Mercedes plans to speed up the rollout of electric models and is committed to meeting more stringent emissions rules in the coming years, he said.

Daimler outperformed its German peers Volkswagen AG and BMW AG last year thanks in part to the progress toward electrifying its fleet and the broader sales recovery the company staged in the second half. Kallenius, 51, also has been restructuring the manufacturer’s sprawling operations to bolster returns.

Deutsche Bank analysts wrote in a report Friday that Daimler is the best way to “play near-term European autos strength" and predicted “extremely promising" developments related to EVs by midyear.

PSA Group, Volvo Cars, Renault SA and BMW are among the carmakers expected to also meet the EU’s emissions rules. Volkswagen has said it might narrowly miss its target.

Stuttgart, Germany-based Daimler will introduce the electric compact car EQA this month after rolling out the latest iteration of its flagship S-Class sedan last year. It will launch four purely battery powered vehicles in 2021 to step up its challenge of Tesla Inc. The company presented a large cockpit screen earlier Thursday that will be introduced in the electric S-Class sibling EQS later this year.

The EQS will offer a battery range of about 700 kilometers (435 miles). The new cockpit screen, some 55 inches wide, offers access to key vehicle functions via the brand’s multimedia system dubbed MBUX.

“The MBUX Hyperscreen is both the brain and nervous system of the car," Mercedes-Benz technology chief Sajjad Khan said in a statement. Daimler aims to generate 1 billion euros ($1.2 billion) in earnings from digital services in 2025, a target Kallenius reiterated on Thursday.

The CEO also acknowledged that Mercedes-Benz is affected by an industrywide supply bottleneck of semiconductor parts that has hit larger German rival Volkswagen AG. The manufacturer is doing everything it can to minimize effects on production, Kallenius said.