This is not the first time Tesla CEO Elon Musk has come out in praise of his rival in EV segment. He had earlier said Volkswagen will become a major plater in global EV space soon.
By : HT Auto Desk
| Updated on: 22 Apr 2022, 01:52 PM 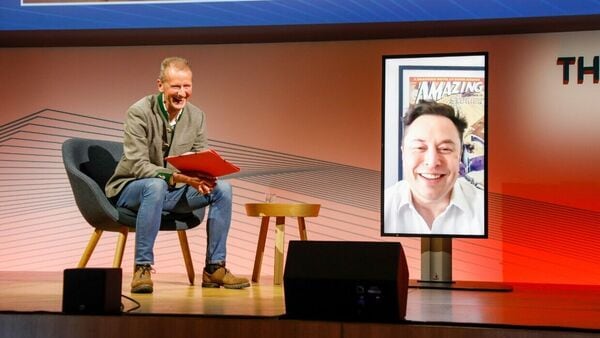 It is not everyday that arch rivals heap praise on each other. However, Tesla and Volkswagen CEOs Elon Musk and Herbert Diess have been known to pat each other often for the work done by the carmakers in the electric vehicle segment. Both were once again seen praising each other after Volkswagen CEO Herbert Diess appeared at a show and spoke highly about rival Tesla. Currently, Tesla is the world's largest EV manufacturer while Volkswagen holds the second position globally. Both carmakers are locked in a race to be the number one.

Diess praised Tesla's growth in recent times during a show recently. "We are second worldwide. Tesla is quite ahead currently, and they're growing fast, I have to admit. He is taking more risks than we can. He's now building a plant in Berlin. It's 200 kms from our plant and I think it's very healthy for us to have a new competitor," said Diess during the show.

Elon Musk replied to Diess' praise saying, “Diess deserves a lot of credit for moving VW rapidly towards electrification. They’re lucky to have him." Diess replied to Musk on Twitter, saying, “Thanks Elon for always thinking outside of the box. And for strengthening the market capitalisation of our industry and helping to cut through German bureaucracy."

Both CEO's have been outspoken admirers of each other for some time despite fierce rivalry in the EV four-wheeler segment. Diess love for Tesla and Elon Musk as well as his push within the Group towards electrification has not gone down too well within his employees. He recently faced ire when Diess hinted at major changes in its facilities to manufacture more electric cars. His intention was seen as a move that could mean loss of jobs. Diess even admitted it during the show, saying, "Yeah, actually, you're right. They don't like it."