The three Lotus models - Elise, Exige and Evora - combined represent almost half of the total production of the brand in its 73-year history.Their current assembly lines will be dismantled and replaced with new state-of-the-art facilities to support the manufacturing of Lotus Emira.
By : HT Auto Desk
| Updated on: 23 Dec 2021, 11:48 AM 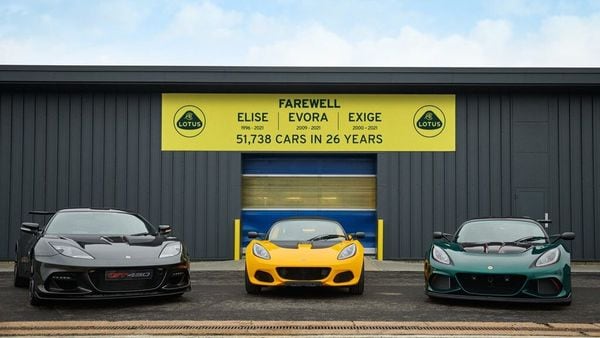 The last units of Elise, Exige, and Evora will be kept as part of Lotus' heritage collection.

British sports car manufacturer Lotus has wrapped up production of its combustion engine-powered Elise, Exige, and Evora models as it sets its eyes on an electric future. Between these three model lines, the carmaker produced a total of 51,738 units over the course of 26 years.

The three models combined represent almost half of the total production of Lotus in its 73-year history. In addition to these, the sports carmaker built 9,715 units for its third-party clients, including General Motors (GM) and Tesla. While the Lotus Elise was originally launched in 1996, the Exige followed it four years later and then came the Evora in 2009.

The 35,124th and final unit of Elise was a yellow Sport 240 Final Edition, while the 10,497th and final Exige was a heritage racing green Cup 430 Final Edition. Production of the Evora ended at 6,117 units with the final unit being GT430 Sport painted in a dark metallic grey.

Now that all these models are out of production, their current assembly lines will be dismantled and replaced with new state-of-the-art facilities to support the manufacturing of Lotus' final combustion engine model - Emira, with an increased capacity of up to 5,000 units per year on a single shift pattern. Emira which is slated to go into production next spring, is currently undergoing its testing phases.

The last units of Elise, Exige, and Evora will be kept as part of the automaker's heritage collection. The company's managing director Matt Windle thanked the team that worked on the production of these models over the year. “As we say farewell to the last few cars, we look forward to the Emira and Evija in the all-new factories at Hethel and sub-assembly facilities in Norwich," he said.

Adding to this, Gavan Kershaw, Director of Vehicle Attributes, said, "2022 is going to be a great year as a new Lotus generation swings into action." Under its Vision80 strategy, Lotus plans to launch four new electric vehicles by 2026.