Home Auto News Lamborghini Urus Suv, Stolen By A Teenager, Chased Down By Owner On A Scooter

Lamborghini Urus SUV, stolen by a teenager, chased down by owner on a scooter 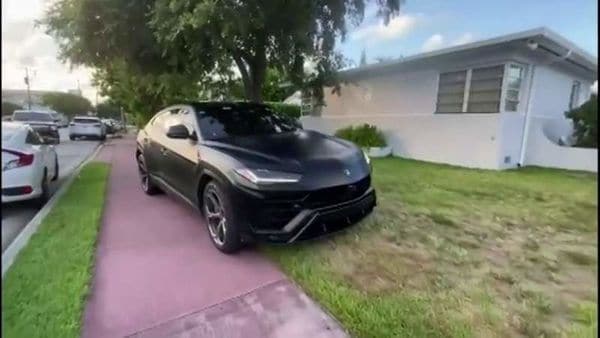 Lamborghini Urus, stolen by a teenager, chased down by owner on a scooter.

In a bizarre incident that took place in Florida, United States, a man chased down his stolen Lamborghini Urus SUV, one of the fastest cars in the world, in a scooter.

The incident took place in Miami, Florida on June 8. The owner, identified as Chris Sanders, went out on a scooter looking for his stolen Lamborghini SUV worth $ 200,000 (roughly converted to ₹1.46 crore) for several blocks moments after it was stolen from his house.

According to local police, a teenager had stolen the SUV. “I’m in my home. I hear this thing start up. I look out the window, and I see somebody driving it away. I got on the scooter, went after the guy," said the owner, while describing the whole incident.

Lamborghini Urus SUV is known as one of the fastest cars in the world. Powered by a 4.0-litre twin-turbo V8 engine, that is capable of churning out 641 hp of power and 850 Nm of torque. The Lamborghini Urus can accelerate from zero to 100 kmph in just 3.6 seconds and is capable of hitting a top speed of 305 kmph.

According to the local police investigators, the suspected car thief, aged around 14 years, was seen on camera running from where he had parked the Lamborghini Urus SUV.

One of the eyewitnesses to the theft was quoted by local new agencies saying, “He said, ‘I stole a Lamborghini just now. I don’t have a license. I can’t drive.’ I didn’t know if he had a weapon. I wasn’t sure how crazy he was. I was trying to talk and calm him down. He asked me for advice. He’s like, ‘I’m 14. I don’t know what to do.’ You’re better off turning yourself in. They’re going to go much, much easier on you.'"

The owner of the stolen Lamborghini later thanked the police for help. He eventually drove back his Urus SUV after the Miami Beach police officers took the teenage suspect in custody.

“Honestly, I can’t believe it happened, but thank God for the police. That’s all I’ve got to say," Sanders said with sigh of relief.