Lamborghini reopens its MUDETEC museum with exhibition on innovation, tradition

The second floor of the MUDETEC museum houses the Lamborghini Countach, a model that celebrates its 50 years of existence this year.
By : HT Auto Desk
| Updated on: 02 May 2021, 17:32 PM Lamborghini has announced that it will reopen the doors to its MUDETEC museum for public on May 3 with a new exhibition called 'Future is our legacy'. The reopening if its museum after months of staying closed due to the coronavirus pandemic coincides with the museum's 20th anniversary.

The company says that the exhibition recalls its brand philosophy of staying ahead and looking at the future. The display is divided in two floor, combining innovation and tradition of the company. A tunnel at the entrance of the museum greets visitors with the sound of the V12 engine along with a video that celebrates the brand's iconic V12 models.

The ground floor displays various models produced from the ‘60s to the ‘90s, from the Miura to the Diablo, and then take a leap into the futuristic design of two recent futuristic models - the Essenza SCV12 and the Vision GT. 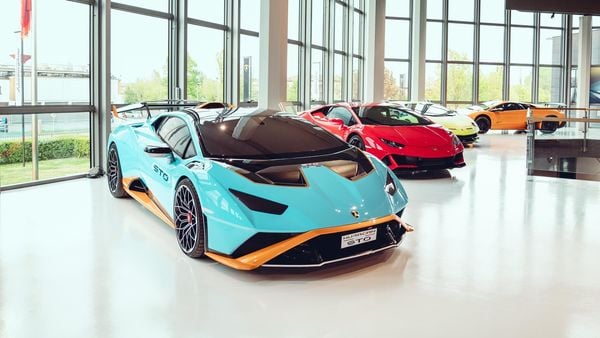 Second floor of the Lamborghini exhibition

The second floor houses the Lamborghini Countach, a model that celebrates its 50 years of existence this year. The iconic model has been featured in various international movies and posters. The Countach has been placed on a platform in such a manner that it seems to be looking over all the models produced since 2000, which also inevitably took inspiration from it in terms of both design and technological solutions.

The exhibition also displays limited edition models such as the Reventón, Sesto Elemento, Veneno, Centenario, and the first Lamborghini with hybrid technology - the Sián. The tour of the exhibition has been enriched with extensive digital content in order make the experience more interactive.

A driving simulator included in the exhibition has a new feature - the Social pass-by card. This allows visitors to take a photo next to their favorite Lamborghini by positioning themselves in front of the screens. They can then share the pictures on social media.

However, due the ongoing pandemic, number of visitors allowed inside the exhibition has been restricted to a maximum of 12 people every half hour.