To celebrate 10 years in Mexico, Lamborghini presents these special models that represent life, death, dream and time.Lamborghini says its dream model is the most distinguished amongst the four for its light blue exterior.
By : HT Auto Desk
| Updated on: 16 Jul 2021, 01:52 PM 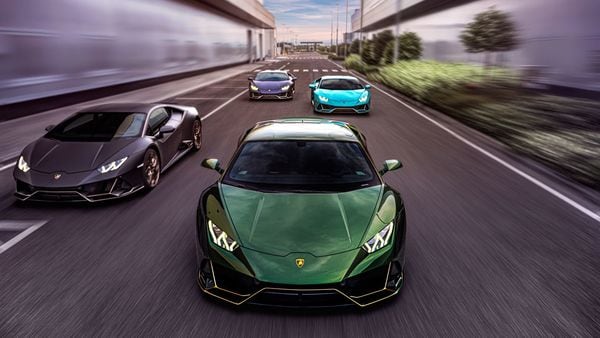 The special edition Vita has been coloured in a special shade of green and gold that represents life and nature. The exterior design is contrasted with fine gold details inside. The Lamborghini Huracan EVO Vita edition comes with an eagle emblem that celebrates freedom and successes in life. On the other hand, the Lamborghini Huracan EVO Morte edition has an emblem of a skull. According to the automaker it has been put to celebrate the experiences that prepare one for the journey between life and death. The blue exterior of the car complements the interior with bronze stitching.

Lamborghini says that the Sogno model is the most distinctive of the four special edition models. With a light blue exterior accompanied by golden highlights, the car comes with a plaque of a two-headed dragon that intends to capture fantasy and dreams. The interior of the car has a two-tone configuration with white and black tones. The seats also have golden stitching. Coming to the Tempo model, it has a plaque of a snake that represents the reinvention of oneself by the shedding of skin. The black exterior of the car with comes Bronzo Serse underlines. The interior has dark hues with bronze accents around the seats, trim and stitching.

(Also read | This 4,000 hp Lamborghini runs on water, oozes out opulence from every inch)

Lamborghini’s first showroom in Mexico opened in 2010. Automobili Lamborghini chief marketing and sales officer Federico Foschini notes that these four special-edition models will give clients endless possibilities in terms of configuring their own Lamborghini. The special edition Huracan EVO super sports cars will be on display throughout Mexico City’s notable landmarks soon.