Karnataka government has stated that production activities will have to start at Toyota's Bidadi plant from tomorrow morning and has directed the employees to return to work.
By : PTI
| Updated on: 17 Nov 2020, 06:22 PM 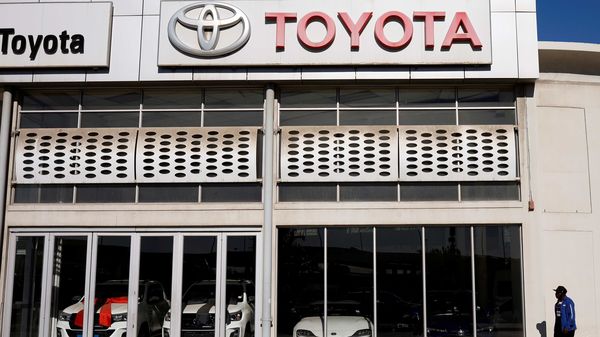 TKM had declared a lockout at its two plants in Bidadi on November 10 following workers' union members resorting to a sit-in strike at the factory premises to protest against the suspension of a worker. (Reuters photo)

The Karnataka government on Tuesday decided to "prohibit" the ongoing workers' strike at the Toyota Kirloskar Motor (TKM) plant at Bidadi near here, and directed the management to lift the lock-out declared by it.

The decision was arrived at a meeting convened by Deputy Chief Minister CN Ashwath Narayan with the management and TKM Workers Union members, along with Labour Minister Shivram Hebbar, Magadi MLA Manjunath and other senior officials of the government.

The government has taken the decision under Section 10(3) of the Industrial Disputes Act, and an official order to this effect will be issued, the Deputy Chief Minister's office said in a statement.

Stating that the production activities will have to start from tomorrow morning, Narayan said, he directed the employees to return to work and asked the management to make all the necessary arrangements.

He advised both sides to resolve all issues through discussions.

TKM had declared a lockout at its two plants in Bidadi on November 10 following workers' union members resorting to a sit-in strike at the factory premises to protest against the suspension of a worker.

It had on Friday suspended 39 union members for involvement in acts of misconduct and in line with the company's disciplinary rules.

Highlighting the labour and investment-friendly climate in the state, he questioned both the management and the unions as to what message are we sending with strike and lockdown?

The Deputy Chief Minister said, the whole world was looking at India as an alternative to China, and countries like Japan, South Korea and Taiwan were eager to set shop in Karnataka, and in such a situation talks like strike and lockdown should not come.