Powered by four electric motors and a 180 kilowatt-hour battery pack, the Rivian R1S can generate 800 horsepower and offers up to 643 kms range per charge.Rivian R1S is a direct rival to Tesla Model X, which is the only other three-row all-electric SUV currently available in US.
By : HT Auto Desk
| Updated on: 21 Jul 2021, 09:26 AM 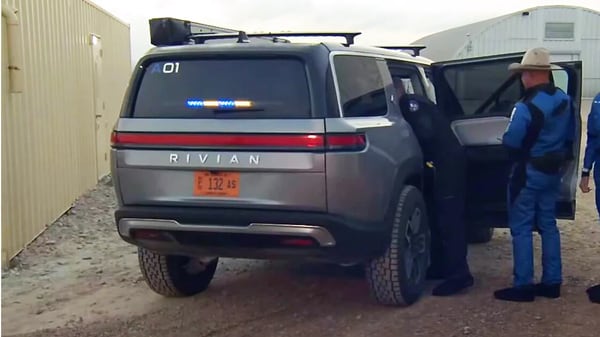 Jeff Bezos joined Richard Branson as the second billionaire in the world who went to space. On July 20, Bezos made his way to the launch site of the Blue Origin spacecraft in an electric SUV in which his company Amazon is heavily invested in.

Rivian, the US-based electric vehicle manufacturer, provided Bezos with its R1S electric SUV to be used as the shuttle for the Amazon founder. Video shared by the Blue Origin shows Bezos and his fellow astronauts boarding the electric SUV and heading towards the launch site.

Jeff Bezos, along with his brother Mark Bezos, Wally Funk, and Oliver Daemen, the youngest person in space, were spotted at the launch site with the R1S SUV, one of several models Rivian will produce this year.

Powered by four electric motors and a 180 kilowatt-hour battery pack, the Rivian R1S can generate 800 horsepower and offers up to 643 kms range per charge. The SUV can sprint from zero to 100 kmph in about 3 seconds.

Rivian aims to take on Tesla on its home turf as the challenger in the EV space with its electric SUVs and pickup trucks. Its R1S electric SUV, which Bezos used as shuttle to the launch pad, is the second production vehicle from the US-based electric car manufacturer.

By using Rivian R1S electric SUV as a shuttle car, both Bezos and Rivian made a statement which many see as a fitting reply to Elon Musk offering Tesla Model X electric cars as Astrovans for SpaceX crew mission last year.

Last week, Rivian announced the production of the R1S electric SUV, along with its electric pickup truck R1T, have been delayed for some time. However, it hopes to bring out the R1S SUVs by the end of the year. When launched, the price of the Rivian R1S is also likely to be more attractive than the Tesla Model X.