General Motors is among several corporations supporting White House programs to promote investments in worker training. Ivanka Trump is leading those efforts, including an advertising campaign called - Find Something New.
By : Reuters
| Updated on: 03 Sep 2020, 09:54 AM General Motors Co Chief Executive Mary Barra hosted Ivanka Trump, daughter and adviser to US President Donald Trump, for a tour on Wednesday of a GM worker training center in one of the hottest battlegrounds of the US presidential race.

GM and White House officials said the meeting at GM's technical center in Warren, Michigan, was scheduled long ago, and was not a political event.

Still, the campaign context behind the location, the subject - manufacturing jobs - and the timing of the visit was inescapable.

Warren is in Macomb County, north of Detroit, which will be pivotal to winning Michigan's electoral votes in November. Preserving US manufacturing jobs has been a focus of President Trump's administration since its first day.

Big US corporations face a challenge during a charged campaign season. Barra and GM have not endorsed a candidate in the presidential contest, and will not, company officials said. Still, GM has much at stake in policy decisions Trump - or his successor - will make on issues such as tailpipe emissions, autonomous vehicle safety rules, trade and taxes.

GM is among several corporations supporting White House programs to promote investments in worker training. Ivanka Trump is leading those efforts, including an advertising campaign called "Find Something New." 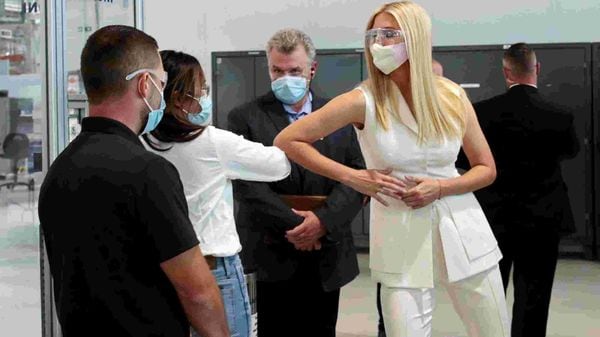 Among the students in the GM program who met with Barra and Trump was Zephirin Hunt, who started with GM as a temporary worker at the automaker's Flint truck assembly plant. Now, Hunt said, he is a skilled trades worker at an assembly plant near Lansing, Michigan, pursuing a course of training in electronic machine and robot controls. "Every 890 hours," of training, "we get a raise," Hunt said.

GM and Barra have had an up and down relationship with the president, who attacked Barra and the automaker for a November 2018 decision to close an assembly plant in Lordstown, Ohio. That shutdown was part of a broader retrenchment at GM in 2019 that resulted in the closure of a transmission plant in Warren, and thousands of layoffs at the GM technical center.

Trump has also blasted GM for investing in China, and criticized the company earlier this year during a negotiation that led to GM building ventilators in response to the Covid-19 pandemic.

GM has sided with Trump in a legal fight with the state of California over its authority to set stiffer vehicle emissions standards than those established by the US government, however.