Home Auto News It's Elon Musk Vs Joe Biden In Battle For Some Attention, Much Recognition

It's Elon Musk vs Joe Biden in battle for some attention, much recognition

Elon Musk and Tesla have been missing from Joe Biden outreach towards automotive companies to go electric.
By : HT Auto Desk
| Updated on: 01 Feb 2022, 02:33 PM 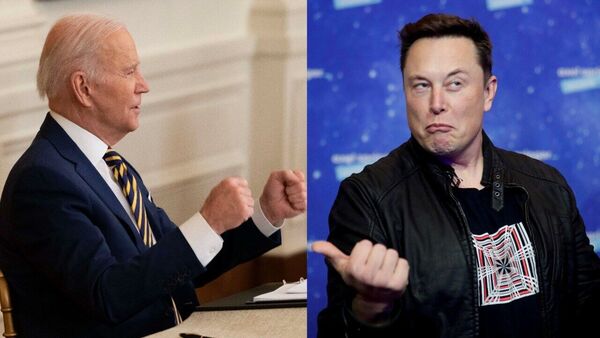 Is US President Joe Biden (L) guilty of ignoring Elon Musk-led Tesla in US push for EVs?

Elon Musk won't have voted for Joe Biden if the US held presidential elections were, hypothetically speaking, held today. There is little love lost between the Tesla CEO and Biden with Musk firing repeated salvos against the 46th US President for failing to recognize what his electric-vehicle-making company has - and continues to - achieved. He even called Biden a ‘damp sock puppet in human form’.

Now it isn't exactly everyday that the CEO of a company openly resorts to expressing his angst against the political leader of the world's most powerful country. But Musk, the world's wealthiest person at present, is described by many as being an eccentric and has a rather unconventional work style and thought process. Fans and critics aside, he is credited to have taken Tesla to pole position in the electric vehicle (EV) race the world over. Tesla not just leads the pack but has a sizable gap despite the fact that it is present in only a hand full of countries.

Why is Elon Musk miffed with Joe Biden?

Tesla is the dominant force in the EV world and the US - apart from China - is a major market for it. Even as rivals seek to capture the throne and the crown, Tesla has managed to drive itself further forward. Now when Biden is betting big on EVs in the US, he has credited companies like GM and Ford for ushering in EVs. He even invited CEOs of GM and Ford - among other top business leaders - for a White House summit meeting. If Musk did search for his invite, he didn't find one.

I meant it when I said the future was going to be made right here in America. Companies like GM and Ford are building more electric vehicles here at home than ever before. pic.twitter.com/5E3ecA93MR

And Musk is all riled up.

To the above tweet of Biden, Musk replied with ‘Tesla’ in all caps. In a separate reply to a Twitter user, he went on to describe Biden as ‘a damp sock puppet in human form.’ He also said that 'Biden is treating the American public like fools.'

Soon enough, Tesla fans also jumped in to complain that Biden was ignoring Tesla and failing to recognize the contribution of the company to the EV movement in the US. After all, Tesla did sell around 3.50 lakh units in the US in 2021 alone.

Why was Tesla ‘ignored’ by Joe Biden?

After Biden met with top business leaders, White House Press Secretary Jen Psaki was asked by journalists about why Musk had been missing. According to New York Post, Psaki said that the three firms which attended were ‘the largest employers of the United Auto Workers’. This is a possible signal to the fact that Tesla's hourly employees aren't unionized.

This is hardly the first time that Tesla has been ‘snubbed’ by White House and the Biden administration. In September of last year, Biden had signed an executive order which aimed at making all vehicles sold in the US electric by 2030. Top executives of several automotive companies had been invited for a meeting.

Following that meeting in California, Musk had unleashed a series of charges and even accused the Biden administration of bias and said it appeared it was controlled by unions.

While Biden has made no official statement or reacted to Musk - unlikely anyway because of the office he holds, the tiff is likely to persist regardless of the milestones Tesla may achieve in the times to come.