Home Auto News How Safe Is A Tesla? This Model S Falls Off Cliff, Driver Escapes With ‘scratch’

How safe is a Tesla? This Model S falls off cliff, driver escapes with ‘scratch’

The incident took place recently in Puerto Rico, where a Tesla Model S fell 100 feet below a cliff and was completely damaged. The owner of the car, who was also behind the wheels, escaped with a minor injury.
By : HT Auto Desk
| Updated on: 27 Nov 2021, 11:36 AM 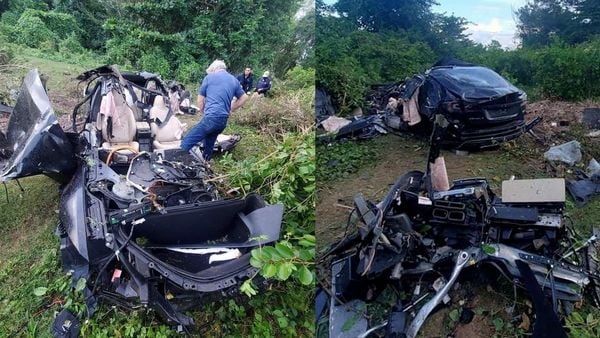 A Tesla Model S electric car fell off a cliff in Puerto Rico. Fortunately the owner of the car walked away with a minor scratch on his arm. (Photo courtesy: Twitter/@eliassob)

Tesla may be the pioneer in the electric vehicle business, but the US-based carmaker is not known for its safety standards. While there have been several instances of safety issues in a Tesla car, government agencies have opened investigations into some of the crashes, putting Tesla in a spot. However, this one Tesla Model S electric car has surprised a few with an incident that happened this week in Puerto Rico.

A Tesla Model S reportedly fell off a cliff in Puerto Rico on Thursday and rolled down about 100 feet below. The electric car, as can be seen from the images shared widely across social media platforms, had been completely damaged due to the mishap, and seems beyond repair.

The owner of the ill-fated Model S, who also happened to be behind the wheels at the time of the incident was quite lucky to escape certain death. He walked away with a minor bruise on his arm.

An user, who posted the images on Twitter, wrote, "Model S P90D accident in Puerto Rico. Car fell through a cliff. Driver walked out alive with only an arm scratch. Happened yesterday. Thanks Elon Musk for your innovative safety features."

Model S P90D accident in Puerto Rico. Car fell through a cliff. Driver walked out alive with only an arm scratch. Happened yesterday. Thanks @elonmusk for your innovative safety features! pic.twitter.com/J9otsbWNI0

The incident with the images of the wrecked Tesla Model S went viral on Twitter, with even Elon Musk, CEO of the EV-maker liking it.

There are no confirmation on how the driver escaped the crash without major injuries. The images do not confirm if the airbags had deployed to save the owner. The reason behind the crash is also not known. Tesla has been under the scanner for its Autopilot feature which has been suspected of one of the reasons behind some of the fatal accidents in recent times.

US road safety watchdog NHTSA had earlier launched a probe of into Tesla’s Autopilot program after a dozen collisions were reported involving the Autopilot system and first-responder vehicles. The regulator is currently assessing the technologies and methods that Tesla uses to monitor, assist and enforce drivers' engagement when using Autopilot. It is also assessing the Autopilot system's ability to detect objects and events on the road, and its response to them.