Reopening a car factory in the age of the coronavirus pandemic means onerous routines that may eat into productivity and shrink output.Safety advice being given to employees include safe coughing and separation screens, frequent garbage collection, etc.
By : Bloomberg
| Updated on: 14 May 2020, 10:36 AM 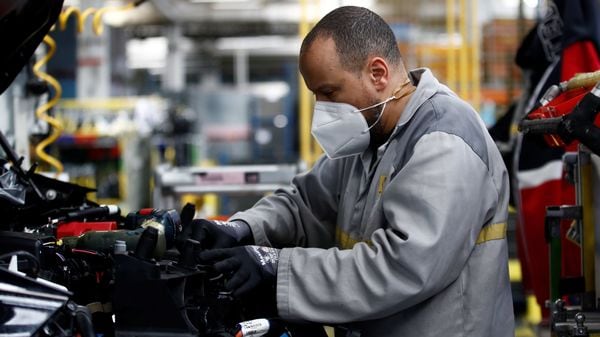 An employee, wearing a protective face mask, works on the automobile assembly line of Renault ZOE cars at the Renault automobile factory in Flins.

It’s the start of a new shift as workers line up at Renault SA’s electric car plant in Flins, a town on the banks of the River Seine about an hour’s drive from Paris.

They enter tents for body temperature checks, get ready to put on their protective gear — masks and gloves — and are brought up-to-date on tool and work-station disinfection. Their work space is different now, with meeting areas and tables spread far apart and sinks added to encourage frequent hand-washing.

Reopening a car factory in the age of the coronavirus pandemic means onerous routines that may eat into productivity and shrink output, the world’s automakers are learning. Renault, which began gradually reopening the Flins site a couple of weeks ago, is joined by French rival PSA Group, German auto giants including Volkswagen AG and Japanese carmakers like Toyota Motor Corp. in restarting manufacturing even as Covid-19 continues its deadly spread.

“Social distancing will certainly impact working practices," said Bloomberg Intelligence analyst Michael Dean. “Productivity will clearly be impacted, although automakers will be wary of ramping up production too quickly before customers can more easily purchase cars." An employee disinfects a worktool as the Volkswagen construction plant reopens after closing down last month due to the coronavirus disease outbreak in Bratislava, Slovakia. (REUTERS)

Car showrooms are just reopening in many countries in Europe after weeks-long shutdowns that choked off commercial activity. European car sales evaporated in April, dropping around 97% in the U.K., Italy and Spain, and 89% in France.

Within weeks of restarting output in Germany, VW decided to halt two assembly lines on four days this month due to tepid car sales. Industry lobbies are now arguing for government stimulus measures such as a possible cash-for-clunkers program in Germany and improved incentives for electric car purchases in France.

Meanwhile, revving up production is turning out to be a painfully slow process. Car companies are putting the same safety precautions in place globally, protocols honed in China’s Hubei province, a major auto manufacturing center and the region where the virus originated.

In France, where work life was already highly regulated, Renault and Peugeot maker PSA are following instructions from the labor ministry, which has gone into overdrive since the pandemic struck, issuing rule books on health protocols for all types of workers in its battered economy.

For those in industrial settings, the advice includes everything from the basics of safe coughing and separation screens, to more frequent garbage collection, airier lunchrooms and ensuring people never come closer than one meter to each other. 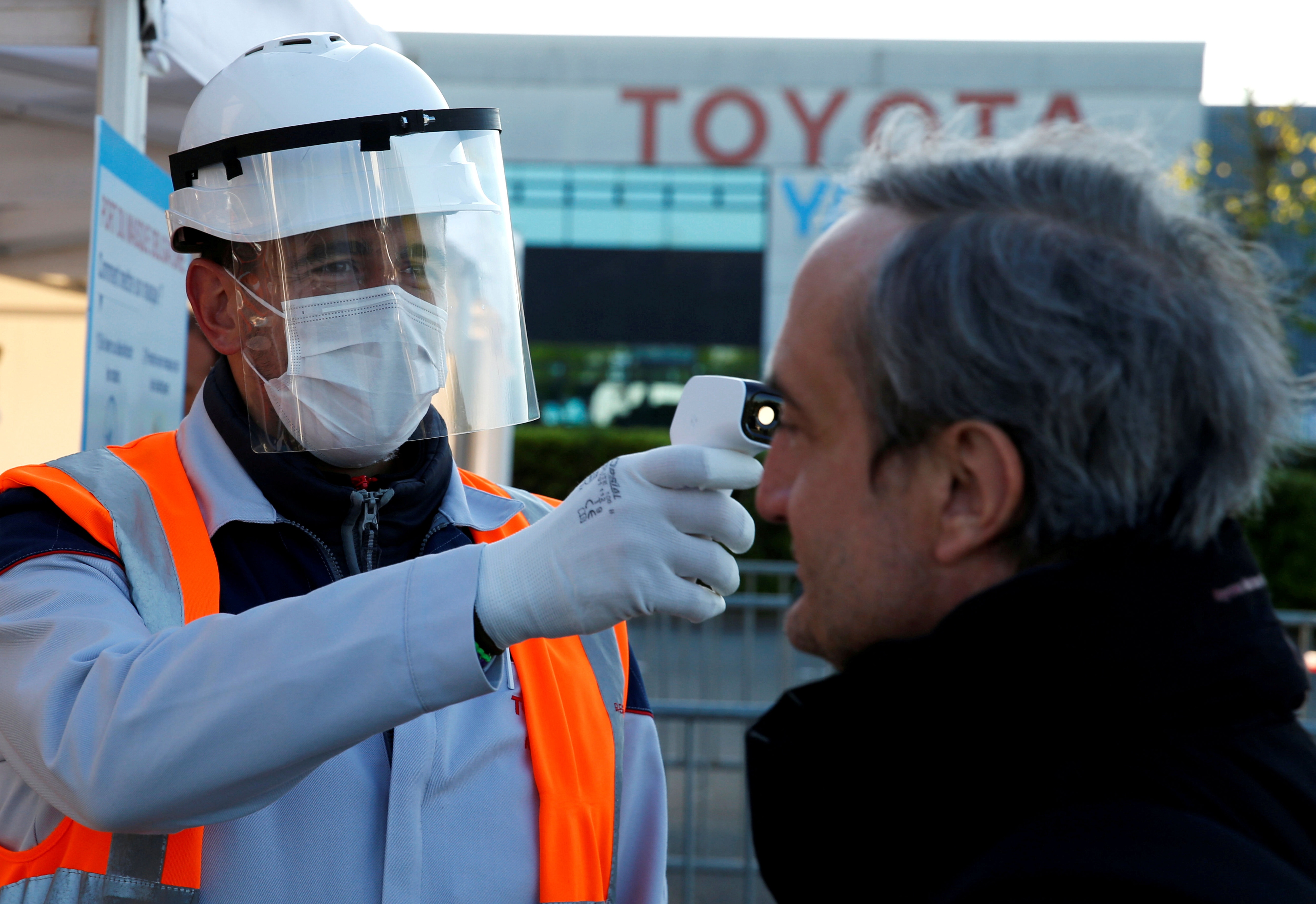 FILE PHOTO: An employee of Toyota Motor Manufacturing France checks the temperature of a worker as the plant resumes its operations after five weeks of closure during a lockdown amid the coronavirus disease outbreak, in Onnaing, France. (REUTERS)

Even with such stringent rules, many workers and their unions are reluctant to kickstart the machine.

Renault sparked the ire of the hardline French union CGT, which won a court order blocking the restart of its Sandouville factory over its health protocol. At Flins, only about half of its 2,600-strong workforce, is back on the job. They will make only about a third of their normal output of all-electric Zoe models and compact Micras, produced for partner Nissan Motor Co.

PSA says production will rise in line with sales to avoid accumulating inventory. No evaluations have been carried out on the impact of the health measures on factory productivity, according to industrial and supply chain head Yann Vincent.

“Our focus isn’t there, it’s on restarting and protecting our workers," he told reporters. “We aren’t looking into how we can gain here or there. We really aren’t there.