Home Auto News Heading To Rome? Get Ready To Board A Flying Taxi From Airport Soon

Heading to Rome? Get ready to board a flying taxi from airport soon

Rome airport is expected to start flying taxi service from 2024. Volocopter, which will supply the flying taxis, hopes to see the service in operation ahead of the 2024 Olympics to be held in Paris.
By : HT Auto Desk
| Written By : Sabyasachi Dasgupta
| Updated on: 29 Oct 2021, 01:19 PM 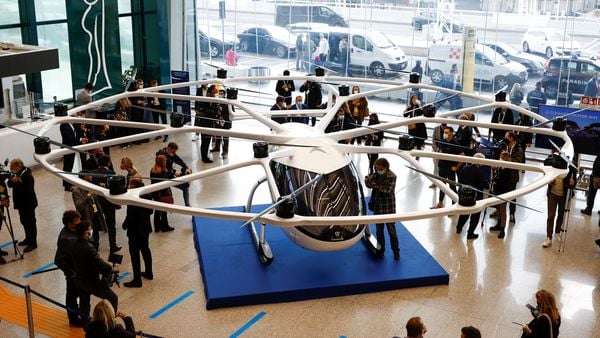 A prototype of an electric air taxi by German company Volocopter seen during a presentation at the Fiumicino airport in Rome, Italy.

People travelling to Rome airport may soon get a chance for an aerial trip over the Colosseum or the Pantheon. The Italian capital is all set to welcome flying taxis in the next two years, and is expected to start its first operation from the Flumicino airport in Rome from 2024.

The flying taxis, to be delivered by a German company called Volocopter, will offer ride into the city centre too, if the airport authority agrees to the idea and gives a go-ahead on schedule. This could mean a flight over Rome's must-visit places. This is why Volocopter aims to make the Fiumicino Airport in Rome as an example for future projects in other cities as well.

The rotor-bladed, battery-powered electric flying taxi can seat up to two people at a time. It can take off and lands vertically. It is still under development, as the German startup recently showcased a prototype of the vehicle at the Fiumicino Airport.

Marco Troncone, the CEO at the Aeroporti di Roma (Rome Airport), said that the flying taxi will take around 15 minutes to travel between the airport and city centre, which is half an hour less than compared to a car ride, but surely will cost way more than the regular cabs. The initial cost of a ride on these flying taxis is estimated to be around 150 euros (roughly converted to around ₹13,000). However, the company hopes that the fare will drop when the service picks up good business.

"The connection will be very swift. It will be a silent journey and ... the level of emissions will be zero," said Troncone.

The German startup of flying cars Volocopter was founded in 2011. Christian Bauer, Chief Commercial Officer of the company said that it is still waiting for a commercial air licence from the European Aviation Safety Agency (EASA). If it obtains the licence in time, Rome could see flying taxis take off in two years. Volvocopter