Three people have been accused of throwing explosive devices at police cars by federal prosecutors in Brooklyn.While no one was injured in either of the two incidents, NYPD cars were severely damaged.
By : HT Auto Desk
| Written By : Shubhodeep Chakravarty
| Updated on: 13 Jun 2020, 12:41 PM

Many protesters have targeted NYPD vehicles during demonstrations in New York.

Several cars belonging to the New York Police Department were damaged or destroyed in recent weeks during protests against the killing of George Floyd in Minneapolis. Demonstrations have repeatedly turned violent in many American cities with New York witnessing some of the worst incidents of arson and vandalism. Now, those found guilty of having attacked cop cars here potentially face life in prison.

News agency AFP reported that three people - Samantha Shader, Colinford Mattis and Urooj Rahman - have been accused of throwing explosive devices at police cars by federal prosecutors in Brooklyn. The three allegedly used the explosives in two separate incidents towards the end of May.

While no one was injured in either of the two incidents, NYPD cars were severely damaged. The accused now face as many as seven charges which include arson, possession and use of explosives and destructive devices and indulging in public disorder. 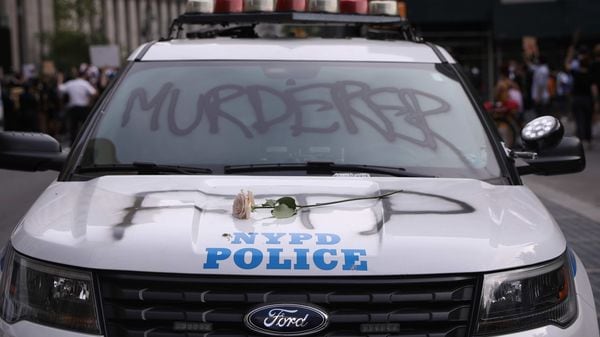 A rose stalk lies on a vandalized New York Police Department vehicle as protesters rally against the death in Minneapolis police custody of George Floyd in Manhattan, New York, (REUTERS)

The three accused are in custody without bail.

While destruction of cop cars as well as damaging public property has been viewed critically - many expressing how it hurts the image and purpose of the demonstrations, others have pointed out the approach of NYPD in tackling the issue. The police department has been accused of being excessively aggressive, often even against peaceful demonstrations. A police official was even caught on camera pushing a woman to the ground and now faces criminal charges.

Violence and arson from protesters, and strong reactions from cops have been witnessed in other parts of the country as well. The most shocking incident, perhaps, was reported from California's Oakland where rioters broke into a Mercedes showroom and damaged the cars on display.

Protests have rocked several American cities after Floyd's death. An American of African origin, Floyd was pinned down by Derek Chauvin, a cop, who has since been removed from the police force and has been charged with murder. Floyd had been arrested for allegedly using counterfeit money at a store to buy cigarettes. He could not be revived. This led to massive protests with people highlighting racism and police high-handedness as reasons behind Floyd's killing.